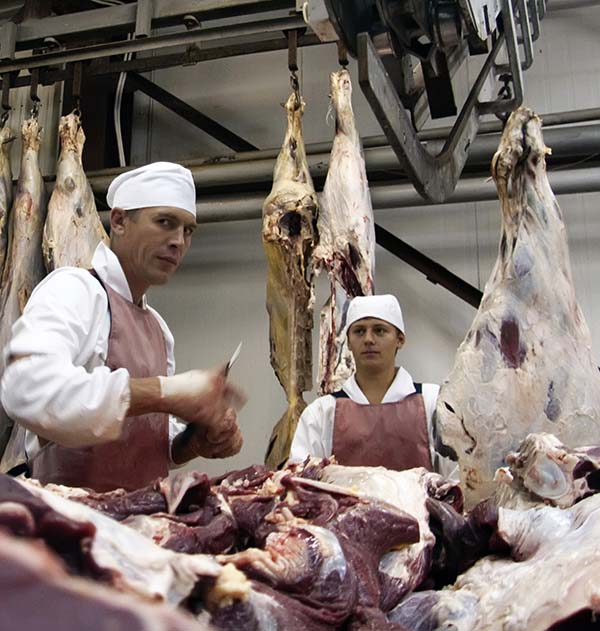 We have the power to change lives for farm workers and end slaughterhouse cruelty by making more mindful food choices.

Today is Human Rights Day. We don’t always consider the human impacts of our food choices, but what’s on our plates directly effects the lives of slaughterhouse workers and farm workers alike.

I wanted to share this moving TED Talk from Food Empowerment Project‘s founder and executive director Lauren Ornelas. She talks about the inequality in our food system and how our food choices impact people and animals alike. Thank you to Animal Voices for sharing it. If you have time, you can go here to listen to their show discussing some of the parallels between animal rights and human rights.

Ornelas tells the story of her road to veganism and shares stories of the cruelty built into our food system. One of the most moving stories for me was about the dairy cow who gave birth to twins. The cow hid one of the twins, because she knew that the farmer was going to come to take her babies away, so that they could sell her milk rather than let her nurse her newborn calf.

As a mother, the thought of someone taking my baby is my nightmare. When I see something bad happen to a child on TV or in a movie, I instinctively reach for the video monitor and take comfort in seeing my own child sleeping in his crib. All that this cow could do was cry for her stolen calves. Slaughterhouse workers become desensitized to the animal cruelty they experience on a daily basis. This isn’t just the kicking of live piglets or the purposeful torture of cows that we deem “extreme slaughterhouse cruelty.” Killing hundreds of animals, day in and day out, wears on your psyche.

“Pigs down on the kill floor have come up to nuzzle me like a puppy. Two minutes later I had to kill them. … I can’t care.” A study from Windsor University looked at how slaughterhouse cruelty impacted violent crime in areas where these facilities reside. Areas with slaughterhouses saw spikes in violent crime. McWilliams says, “One might object that a slaughterhouse town’s disproportionate population of poor, working-class males might be the real cause, but [study author Amy] Fitzgerald controlled for that possibility by comparing her data to counties with comparable populations employed in factory-like operations.”

So, what is going on? Killing animals day after day is traumatic. Experiencing slaughterhouse cruelty day after day desensitizes workers to violence. Slaugherhouse workers are the unrecognized human casualties of animal agriculture.

“We are so detached from animals in our society, and we are so detached from the means by which our food is produced,” says Ornelas. But we can make a difference for slaughterhouse workers and farm workers by simply making different food choices. She says that we have to look beyond the slaughterhouse and consider the human rights of all farm workers who produce our food.

In her talk, Ornelas reminds us that animal agriculture isn’t the only place that we find cruelty. Farm workers work in often abhorrent conditions. Farms pay workers slave wages for backbreaking work. Farm workers are exposed to some of the most toxic chemicals on the planet. Chocolate plantations often exploit child workers.

From ending slaughterhouse cruelty to addressing child labor and unfair wages for farm workers, we have a lot of work to do if we truly want a food system that embraces animal rights. The realities of slaughterhouse cruelty and our food system in general are pretty grim, but Ornelas reminds us that we have the power to change that every day by choosing our food mindfully.

Image: Mother Cow and Calf and Slaugherhouse photos via Shutterstock