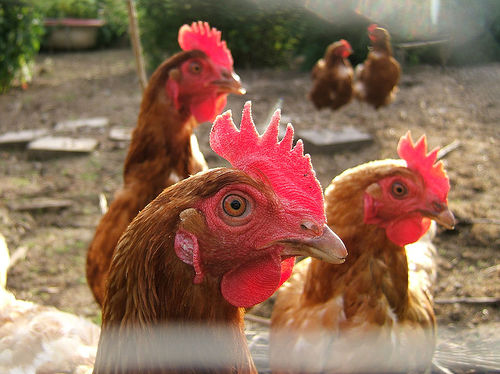 The second largest chicken producer in the United States has been lying to consumers.  Tyson Foods has been claiming chicken as “Raised without Antibiotics” that has been injected with drugs before hatching.

Tyson has been tricking Americans and bending USDA rules about truthful labeling regarding antibiotics in poultry.    The company has spent tens of millions of dollars in advertising its chicken as “raised without antibiotics” this year.  Tyson has admitted to injecting eggs with antibiotics, and the USDA has responded by asking the company to stop using the antibiotic-free label. Tyson’s has filed a lawsuit to keep using the label, claiming the USDA’s rules do not apply before the second day of life.

Not only does Tyson inject antibiotics into its chickens before they hatch, they also treats the birds’ feed with bacteria-killing ionophores.  Tyson claims that ionophores are antimicrobials rather than antibiotics, but the USDA disagrees. Tyson and the USDA did reach a compromise, and now chicken fed ionophores is labeled “raised without antibiotics that impact antibiotic resistance in humans”.  The antibiotic injection before hatching is a different story though and remains unsettled.

According to Natural News:

Not long after, on June 3, USDA inspectors discovered that in addition to using ionophores, Tyson was regularly injecting its chicken eggs with gentamicin, an antibiotic that has been used for more than 30 years in the United States to treat urinary tract and blood infections. The drug is also stockpiled by the federal government as a treatment for biological agents such as plague.

The USDA has told Tyson that its antibiotic-free label is not “truthful and accurate”; however, Tyson sticks by its claim since technically, the chickens haven’t been “raised” yet when injected “in ovo”.  The truth is the antibiotics remain in the chicken after hatching, and the American public has been lied to by this food giant.

Image:  bigbold on Flickr under a Creative Commons License