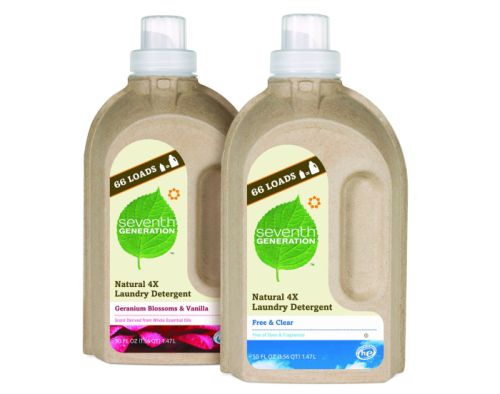 Seventh Generation liquid laundry detergent will soon have a new look. They are introducing a new bottle made of recycled cardboard and newspaper and 66% less plastic.

As part of plastic-free February, I became very aware of every plastic thing I used. I found out that now only do I use a lot more plastic than I thought, but that it’s virtually impossible to cut back. Many items just don’t come without a plastic package.

Laundry detergent bottles are recycled about 29% of the time, so most of them end up in landfills. It takes about 500 years for one of the bottles to decompose in a landfill.

The outer shell composed of cardboard and newspaper can be recycled with other paper products, upcycled up to seven times, and then composted. The inner plastic bag is #4 plastic and the cap is #5 plastic. Both plastics can be recycled.

Inside the new Seventh Generation bottle is an improved version of their liquid laundry detergent. It’s twice as effective as their current version, meaning you can use half as much to get your clothes clean. This saves on transportation costs.

This same bottle was tested with milk and sales increased by 72%.  The Straus Family Creamery used the new bottle with their nonfat milk and ran the test at Whole Foods Market.  This gives me more hope for being able to reduce my plastic use and still satisfy my family’s milk habit.

The new bottle is being rolled out on March 16. It should be in stores around the U.S. by the end of March.

You can read more on this new eco bottle over at our sister site, Green Building Elements.