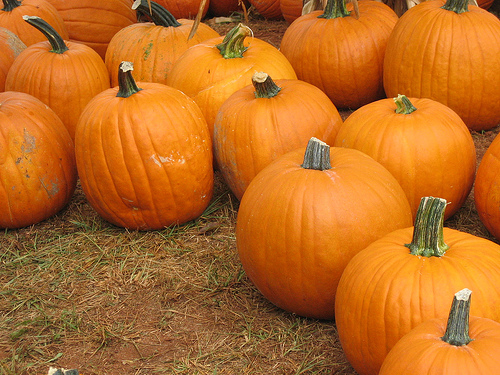 Last week I started to notice some peculiar eating behaviors. One of my girlfriends told me that she’d picked up an acorn squash from the supermarket. A neighbor told me he was making an apple pie for Labor Day. And then my husband told me he was craving pumpkin bread pudding.

Normally I could chalk up this desire for quintessential fall produce to the unseasonably crisp weather we’re having in Missouri right now. But even before the cold front moved in, a few local chefs started asking the farm whether we had any winter squash for sale.

With the kids back in school, Halloween candy on display at the supermarket, and the first official day of fall just a little more than two weeks away, it’s easy to get confused about seasonal eating.

And it turns out that even farm-to-table restaurants are not immune to seasonal eating confusion. September has arrived and chefs are ready to display their fall menus.

Meanwhile, at the farm, we just planted a whole new crop of summer squash.

Extreme heat and humidity makes for difficult growing conditions in July and August here in Missouri. Milder temperatures in September and October makes this an optimal time to grow, well, just about everything. We’ll be selling heirloom tomatoes, pattypan squash, and cucumbers through October.

Don’t get me wrong – we’re growing typical fall produce like Brussels sprouts, Swiss chard, kale, and beets now too. All I’m saying is that we still have weeks of summer produce ahead of us.

So why start eating winter foods now, in early September, when you’ll be practically living off the stuff November through March? Trust me, there will be plenty of time to broaden your repertoire of winter squash and root vegetable recipes.

The best way to eat seasonably is to rely on your local farmers market, community garden, or CSA (community supported agriculture coalition) for produce – not the grocery store.

Image courtesy of NancyCoop via a Creative Commons license.