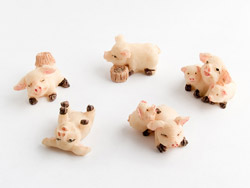 In an unusual twist, biotech scientists have decided that focusing on creating hybrids of new animals and plants is just thinking too small. “We realized that if we were to try and fix all the ills in the current Big Agriculture system, we’d be cloning for the next millennium” said Irving Pinkel. “So, we figured maybe it would be easier to just start from scratch.”

According to Pinkel and his lead associates, the galvanizing moment came after an experiment with cloning a round worm gene into pigs that would make the resulting pork “heart-healthy” and containing more Omega-3 acids. Three of the piglets had to be euthanized due to heart defects.

“Well, the irony of the situation set in,” said Pinkel. “We were all out and maybe had a few too many beers. One of the guys said, ‘You know, I bet if we just fed them [pigs] a natural diet, that would fix the whole meat thing without cloning. Could you do that?'”

“Sure enough,” continues Pinkel, “he was right. We realized that we weren’t doing anything better than nature, we were just reinventing the wheel with really bizarre tactics.”

Pinkel and his associates are now hard at work trying to figure out what a real food system looks like and are hard at work to isolate the right characteristics for the massive cloning project. So far, he estimates that the project will take about 200 years to completely re-engineer what industry only took fifty years to destroy.

“Sure, I won’t be around to see the project completion,” says Pinkel. “Unless they clone me.”

Happy April Fool’s, of course. This article is entirely false, but was inspired by a true news article. As hard as it is to believe, scientists did actually combine genetic material from a round worm with pig genes in pursuit of breeding a “healthier” meat (Thanks, Ethicurean). Such a bizarre prospect, especially with the lack of food labeling, that the real joke may end up being on consumers plates.