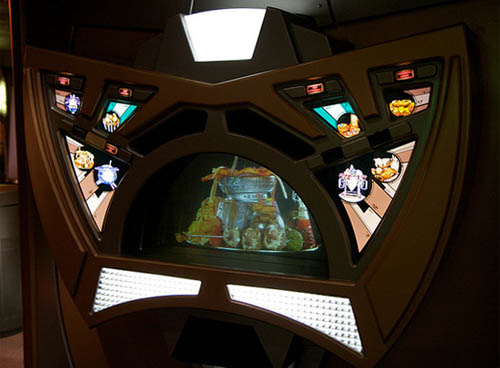 It almost sounds like a replicator from Star Trek: you load in food “inks,” and out comes a printed meal.

Scientists at Cornell University are developing a machine that does just that. Using their FabApp, you can enter and adjust recipes and the printer creates the dish. The idea is to make cooking accessible to folks who don’t know how. According to BBC News:

People lacking even basic culinary skills could download the recipe files of master chefs or print out nutrition-packed dishes recommended by their doctors.

They also suggest that it could help cut back on food waste by eventually cutting out…basically the whole food-producing process from farming to cooking.

Call me a purist, but this sounds like it would take a lot of the joy and soul out of “cooking” along with the work. Part of what makes a meal special is often the love that went into the dish, from the ingredients to the time spent at the cutting board and over the stove.

What do you guys think? Is this a game-changing breakthrough or something best left on the sci-fi screen?