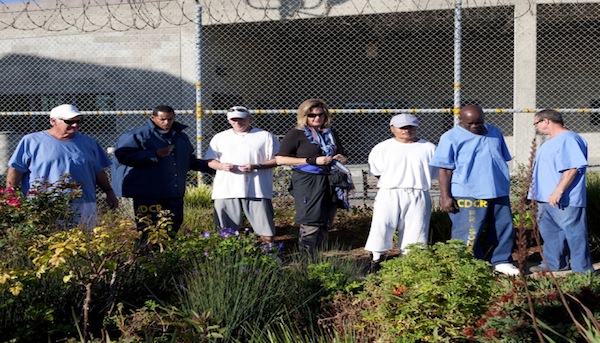 There are a lot of things wrong with our nation’s prison systems. But one thing going right is worth acknowledging. San Quentin prisoners just harvested their first vegetables planted last fall from their “victory garden.”

With help from the Insight Garden Program and Oakland area nonprofit Planting Justice, inmates planted onions, garlic and leafy greens last November. The harvest isn’t enough to feed all 3,700 inmates housed at San Quentin, and prison rules forbid selective sharing. So the inmates opted to donate the harvest to a local food bank. “It’s their opportunity to give back,” Beth Waitkus, director of IGP told Civil Eats.

But just because the inmates can’t keep their harvest doesn’t mean they’re not excited and transformed by the gardening experience. “You’re learning about plants, but you’re also learning about yourself,” inmate Eric Davis told Civil Eats about his time in the IGP. “I started to see things differently, to say the least.” Davis was there when San Quentin first planted a flower garden in 2003. “It [was] the only green thing in the yard,” he said.

“The garden represents a victory of patience and tenacity in the complex context of the correctional system: Getting it built took several years of planning and a lengthy approval process,” explains Civil Eats. “But it also represents a victory of the symbolic over the literal. In a prison, a garden becomes a field of meaning.”

Victory gardens, planted during World War I and World War II, were designed to take the pressure off of the nation’s food supply during wartime. The gardens were planted at homes and in public parks. And there’s a strange irony here in our exiled prisoners planting victory gardens. It feels like we’ve asked warring soldiers to sow seeds while in battle. But that would have probably brought a similar gratitude to the soldiers as it seems to bring to our nation’s incarcerated.