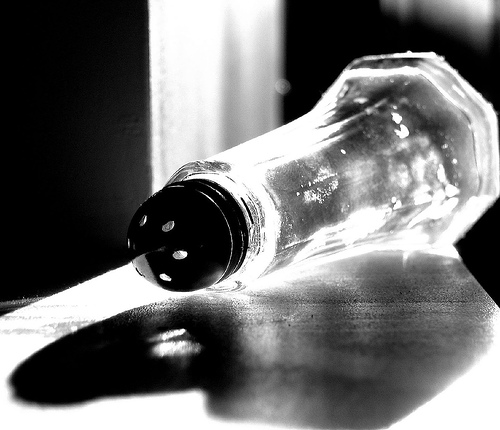 As more and more evidence that salt has ill effects on our bodies emerges, processed food companies are fighting harder than ever to keep their recipes intact.

We know that salt is linked to stroke and cardiovascular disease. The vast majority of salt in our diets comes from restaurant and processed foods, and folks like Michelle Obama and Mayor Bloomberg in New York are looking to limit the amount that food producers can include in their products.

Of course, makers of highly processed foods are staunchly opposed to reducing the sodium in their prepackaged edibles

Their main argument is that without salt, processed food is bland and tasteless. Here are some stellar descriptions of salt-free processed foods from a New York Times article on the topic:

Beyond its own taste, salt also masks bitter flavors and counters a side effect of processed food production called “warmed-over flavor,” which, the scientists said, can make meat taste like “cardboard” or “damp dog hair.”

They went on to taste test a few of Kellogg’s most popular convenience foods, sans the salt.

The Cheez-It fell apart in surprising ways. The golden yellow hue faded. The crackers became sticky when chewed, and the mash packed onto the teeth. The taste was not merely bland but medicinal.

They moved on to Corn Flakes. Without salt the cereal tasted metallic. The Eggo waffles evoked stale straw. The butter flavor in the Keebler Light Buttery Crackers, which have no actual butter, simply disappeared.

What I’m getting from these descriptions is that without the salt to trick your palate, folks can really taste the chemicals and processing that creates these food products. The other point that a food producer made is that our taste for salt is cultivated – we expect saltier foods, because our mouths are used to tasting saltier foods.

It’s a tricky situation. Low income families often rely on these cheap, highly processed foods, and you don’t want rising food prices to mean that folks are going hungry. If you force these companies to drastically cut the salt, they say that it will mean higher food prices.

On the other hand, do we want the most affordable foods to also be the unhealthiest? It feels like a delicate balance between health and hunger in a lot of ways.

So what do you guys think? Should we be pushing these companies to cut the salt? Are their complaints about cost and flavor legit, or are they resisting because it’s easier to leave their recipes as-is?

To read more about the struggle over salt, including information on the food industry’s diversionary tactics to counter research about salt’s effects on health, check out the New York Times article.