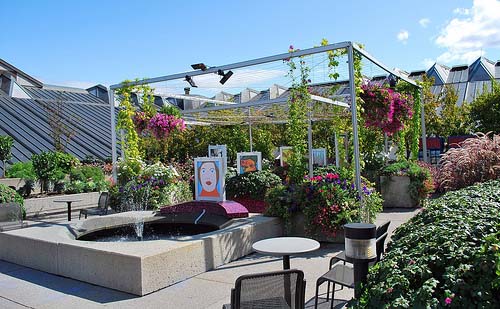 With seasons changing yet again, starting a garden might be the last thing on a person’s mind. Not so here in Madison, Wisconsin, where a local group is pushing for more community garden spaces in the downtown area. This isn’t especially newsworthy until you hear where they’re proposing to add the garden – the top of the Madison Public Library.

Community gardens and downtown green space aren’t new ideas, but at a public presentation on Thursday night, members of Downtown Madison Community Gardens, said if their proposal is accepted, the garden would be the first rooftop community vegetable garden on a public library in the world.

The push for more community garden space in downtown Madison started last spring after organizers started talking to residents at the weekly farmers market. After some discussion of space, someone suggested looking to the rooftops as a place for gardens to go.

“Once you think of rooftop gardens, your eyes look up and you see the city differently,” Jane Anne Morris, one of the group organizers, said.

From there, it was only a few suggestions to get to the idea of a public garden on the roof of the library.

There are at least a few examples of other community green spaces/rooftop gardens that the group used as models: the Chicago City Hall roof, Glide Community Church in San Francisco, the Ballard Library in Seattle, and the Kansas City Central Library.

Additionally, the group pointed to some national support for community gardens. Specifically, the Community Gardens Act of 2009 which is currently in the House Agriculture Committee. There also also a number of community gardens going up in Washington D.C., including The People’s Garden at the USDA headquarters.

Rooftops gardens seem to make good sense in Madison. The downtown, if you’ve never been here, has a unique layout. We have two huge lakes, with one long strip of land going between them – the isthmus. Right now, there is only one community garden on the entire isthmus are, although there are some out in the suburbs.

As the organizers pointed out, having rooftop gardens in Madison could help lower urban runoff (a major plus in a city flanked by two lakes), help create a sense of community downtown, and provide places for city residents to plant their own vegetable gardens.

The community garden proposal probably going to face opposition, despite Madison’s reputation as a great place to live that values the environment and public green spaces. At the moment, the Madison City Council is in the midst of the city budget debate. One of the biggest controversies is a proposal for a $37 million renovation to the public library. In order to have a community vegetable garden on the roof, the overall library project has to get the go ahead.

There also aren’t any firm estimates about how much adding a garden to the top of the building would cost. At the meeting, members of Downtown Madison Community Gardens said they’d gotten a quote as high as $3 million, which they think seems high. They’ve also hear a number as low as $250,000 to just create a green roof on the top of the building.

Those at the presentation emphasized that they don’t have any firm ideas about what the garden should be, only dreams of what it could be. They are open to talking about the idea; their main goal it to get everyone else talking about it too.

Image credit: meddygarnet at Flickr under a Creative Commons license