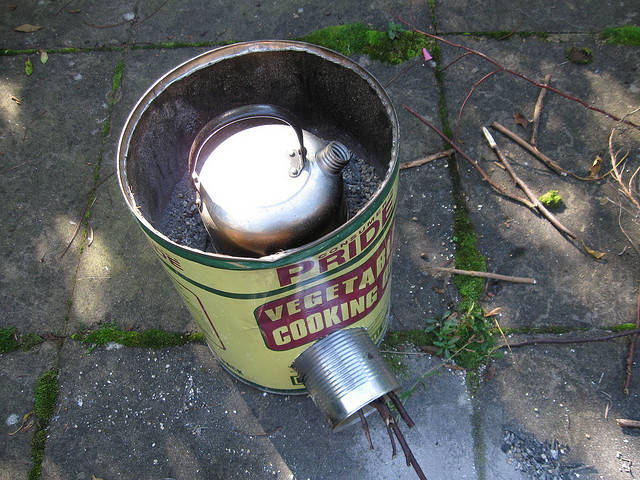 A “rocket stove” sounds like something you’d expect to see  in a science fiction movie, or even on a real space flight.

You’re more likely to find one, though, in a remote village in a developing country, or, at the very least, at a camping spot.

But don’t ordinary fires work just fine for cooking? Well, if you’re just doing it while camping, sure—a campfire certainly has a romantic appeal in those settings. But if you’re cooking over an open fire every day, you’ll also spend a lot of time gathering the wood necessary to cook… and probably inhaling a lot of smoke in the process.

In the developing world, cooking over open fires fueled by wood or charcoal is pretty standard: according to the World Health Organization, about three billion people still prepare food this way (usually indoors). All of that smoke creates pretty unhealthy indoor air—women and their children breathe in amounts of smoke equivalent to consuming two packs of cigarettes per day. And around four million people die each year from diseases tied to that cooking smoke.

Additionally, inefficient use of wood fires generally leads to deforestation, which, in turn, makes wood-gathering an even more onerous job: women in the developing world often spend several days of each week on this one task. Learn more at The Global Alliance for Clean Cookstoves.

The rocket stove was developed as a cleaner, more efficient alternative to open fires.

Dr. Larry Winiarski of sustainability non-profit Aprovecho developed the stove in the early 1980s. The underlying concept: a wood-burning cookstove that burns so cleanly and efficiently that breathing smoke and gathering wood would cease to be challenges, and less wood needs to be gathered to prepare food for families.

So, How Does a Rocket Stove Work?

In order to make the most efficient use possible of the wood used as fuel, the stove requires space for air to flow under the fuel, and insulation to hold heat in so gases emitted from the burning fuel also get burned. As long as these elements are present, the materials to build the stove used don’t matter so much (as long as they’re fire-resistant and won’t explode from excess heat). Rocket stoves can be made from bricks, tin cans, steel drums, or even a cob-like mixture of clay and sawdust. Check out my post on sustainablog for a range of plans for building your own rocket stove.

Like the stove itself, the following video isn’t a product of the latest cutting-edge technology… but it does show the basic form of the rocket stove itself (as well as featuring Dr. Winiarski himself):

Why Would I Want to Build a Rocket Stove?

Okay, most of the folks reading this don’t need a device like this—we’ve got an electric or gas stove in the kitchen. But for an interesting alternative to the typical outdoor grill, or for some insight into what cooking looks like in many parts of the developing world, a rocket stove makes for an intriguing DIY project. If you really want to take your energy efficiency efforts to another level, you might also look into a larger version designed for heating (though also check your property insurance to make sure you’re voiding your policy!).

Used, or even built, a rocket stove? Share your experience with us…

A version of this article originally ran at The Green Divas. It is republished here with permission.