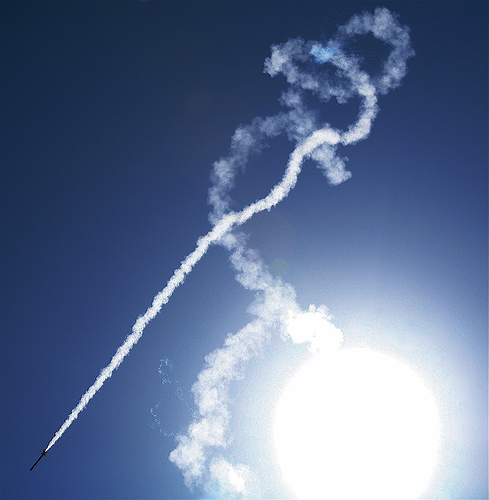 Have you heard? A “potent thyroid toxin” that is a component of rocket fuel, bleach, and many fertilizers, perchlorate, contaminates the drinking water of up to 17 million Americans in 26 states according to the EPA.

In 2009, a study by the U.S. Centers for Disease Control and Prevention also found that it was present in 15 top-selling brands of infant formula. Environmental Working Group (EWG) and a number of others have been pushing for federal regulation of perchlorate since at least 2001, when EWG found it present in California drinking water, but without much success.

The EPA is finally going to regulate perchlorate, as well as 16 other “toxic chemicals,” it announced last week, after years of ignoring the issue. It will apparently take it two years to establish maximum permissible limits, though. Hmm, a little slow?

The Bush administration chose not to regulate this toxin, which could be the cause of altered thyroid hormone levels in women and can “interfere with normal brain development” in children, probably because of lobbying from the defense and aerospace industries, which would have had to invest in expensive cleanup efforts. Three EPA scientific advisory panels objected to Bush’s decision in 2008, but Bush didn’t care.

Good policy. Protect the defense and aerospace industries from cleaning up their mess but don’t protect U.S. women and infants.

Other Unregulated Toxic Chemicals in Your Water

Think this is the only pollutant the EPA doesn’t regulate? Think again. In fact, the EPA regulates fewer pollutants than it doesn’t regulate. A 2009 analysis by EWG found that our nation’s drinking water contains at least 315 pollutants, 202 of those don’t have a legal limit. Not uplifting…

“Last month, California regulators proposed to decrease the state’s public health goal for perchlorate from 6 parts to 1 part per billion,” EWG reports. Hopefully, the state will adopt that and will actually work to achieve it. If you’re one of California’s many residents, let the state know you want to see this toxic chemical reduced. You can make a difference on this issue if you speak up.