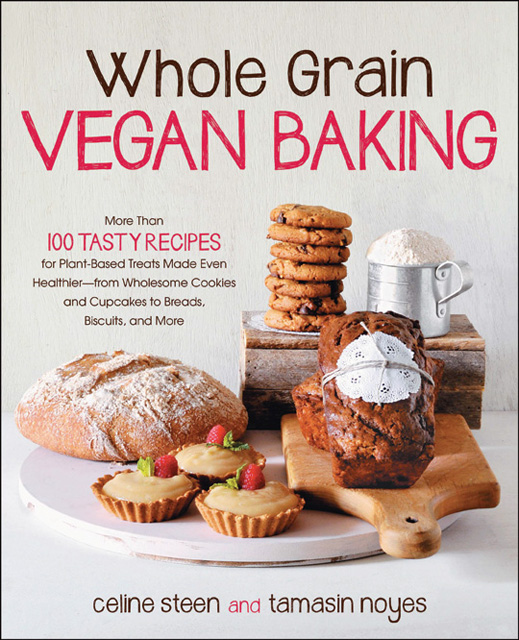 I am a pretty stoic vegan, but I have to admit that I got very excited when I first learned about Whole Grain Vegan Baking, the latest book of vegan recipes by Celine Steen and Tamasin Noyes (the team that brought us Vegan Sandwiches Save the Day!). After getting a crash course by starting Sunberry Baking Company with my wife, I have become fascinated by the science and art of vegan baking.

While our baked goods were 100% vegan, and incorporated organic and fair-trade ingredients almost exclusively, our “healthy” options were the minority. Many vegans and non-vegans alike automatically assume that vegan fare is healthy fare. While going vegan by default means eliminating virtually all of the cholesterol and saturated animal fats from your diet (as well as the cruelty and animal suffering!), it does not automatically equate to a nourishing, nutrient-dense diet. After all, one could “go vegan” and eat only potato chips and Oreos…

Enter Whole Grain Vegan Baking, which shows beyond a doubt that healthier, whole-grain foods can make a vegan diet even more nourishing…as well as satisfying and delicious. Steen and Noyes really go all out when it comes to creating recipes that can stand on their own merits, rather than serve simply as the sad (“healthy”) misfits sitting on the table no one wants to eat at.

In fact, Steen and Noyes celebrate the personalities of whole grains. As they put it when introducing Chipotle and Corn Spelt Muffins, “Whole grains really like to prove you wrong, in their own deliciously twisted way” (52). And we meet many of these twisted “stars” in Whole Grain Vegan Baking, starting in the introduction and then recipe by recipe. The resulting surprises are many and often delightful–for example, Peanut Butter Surprise Cookies with peanut butter, chocolate chips, and Sriracha sauce, or Lemon Ginger Rolls that provide a spin to the traditional cinnamon roll.

As helpful as the authors are in providing instructions and guidance for inspiration and creativity, Whole Grain Vegan Baking is more appropriate for readers who have some experience with vegan baking. Faced with a panoply of flours, flakes, and other unusual ingredients, many beginners likely will be intimidated; my experience has proven that most people perceive vegan baking on its own to be “too hard,” and trying to throw in a lot of unfamiliar ingredients can easily turn them off completely–to the baking, if not the eating.

The book’s very small text can also be a little off-putting, making it hard to find one’s place again with the back-and-forth glancing that baking from a written recipe requires. And, for better or worse, the recipes are not exclusively wholesome and healthy: we still find a fair amount of sugar, oil, chocolate, and other sweet-treat staples, albeit in smaller amounts and different than forms than usual.

All of that said, I thoroughly enjoyed thumbing through Whole Grain Vegan Baking and seeing what flavor and texture combinations the authors had created. While I marked a number of recipes for later experimentation, I decided to make their Coconut Spice Granola (24) and Whole and Oats Cookies (122).

Whole Grain Vegan Baking will surely excite anyone interested in vegan food that is both healthy and tasty, as well as cruelty free, even if more experienced bakers may find the book most useful in the kitchen. Steen and Noyes clearly work well together, and their remarkable collection of whole-grain vegan treats testifies to their passion and knack for making good vegan food.