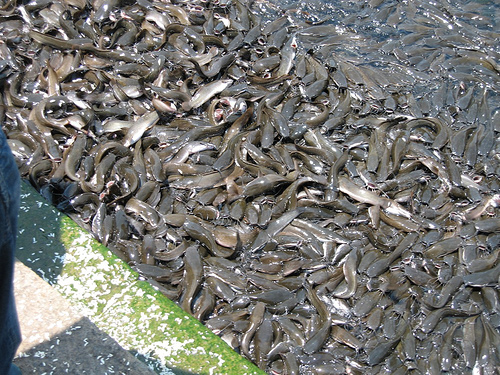 What do you know about the fish you eat?

I don’t keep up with fish news that much, since I don’t eat fish, myself, but an issue I am increasingly hearing about is that fish pumped with too many antibiotics and other drugs are causing real health problems for the humans who eat them.

The newest report out on this topic, by Exponent Inc.’s Center for Chemical Regulation and Food Safety, discusses “new alarms” regarding “the potential long-term consumer health risks of imported catfish grown in contaminated water and treated with drugs banned for use in U.S. fish-farming.”

Contaminated Fish and the Short- and Long-Term Health Consequences

Reportedly, approximately 1/3 of the catfish sold in the US are imported, mostly from Vietnam or China. In these countries, “fish farming environments are far less controlled and the incidence of contamination is much greater than in the United States.”

Eating such fish has been found to have “serious long-term human health consequences, including longer-lasting illnesses due to antibiotic build-ups that leave people less responsive to antibiotic medications and an increase in drug-resistant pathogens that can be transmitted to humans via the food chain.”

Short-term health concerns include the fact that imported catfish from Vietnam are two times more likely to have salmonella contamination than domestic fish.

Some prohibited antimicrobials found in imported catfish include Malachite green and Gentian violet. Gentian violet has been scientifically linked to human bladder cancer.

What Does the Report Recommend?

“The report recommends that the USDA regulatory program that includes evaluations and inspections of catfish production and processing will provide stronger oversight and consumer safety than current
government inspection programs. Congress approved a law shifting catfish oversight to USDA two years
ago, but the law has not been implemented.”

Benefits of USDA inspection would be as follows:

• USDA requires that countries exporting products to the U.S. have inspection programs equivalent to the U.S. program based on USDA review.
• USDA requires continuous inspection of the foods it regulates.
• USDA sets standards for microbial hazards, tests for contamination, tests production facilities, and evaluates individual facilities.
• USDA regularly conducts foreign inspections of producers who export to the U.S.
• In the last 11 years, the USDA’s regulatory program has decreased Salmonella prevalence in all classes of products it inspects.
• USDA has not certified either China or Vietnam to ship USDA-regulated raw, non-processed products from any meat animal to the U.S.

For more on this topic, read the summary of the report or the full report itself, Catfish Risk Profile.