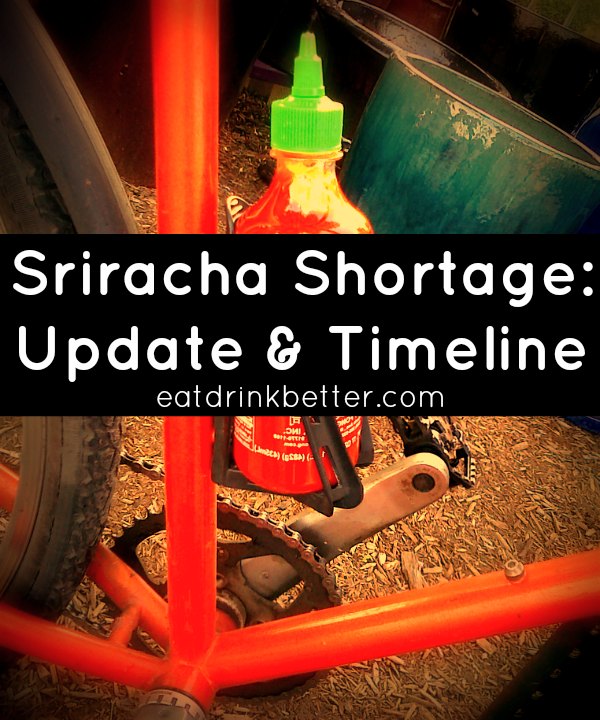 Hot sauce lovers have been hoarding bottles, afraid that a Sriracha shortage was just around the corner. Here’s why, plus the latest in the Sriracha saga.

There has been ongoing drama over the Sriracha factory in Irwindale, California since last October. Some residents complained about the smell from ground chilis. The factory ignored them. Things escalated. A Sriracha shortage seemed eminent.

In case you haven’t been following the Sriracha hot sauce story unfolding in Irwindale, California, here’s a quick and dirty Sriracha timeline for you.

October 2013: Residents of Irwindale, California complained that the emissions from the plant were a “public nuisance.” They sued the factory and tried to get it to shut down, people began to worry that a Sriracha shortage was coming..

November 2013: Judge rules to keep the factory open, but after pressure from Irwindale residents another judge shuts the factory down. Because of how its production schedule works, the company still says there may not be a Sriracha shortage.

December 2013: The Department of Health changes its rules and stops Huy Fong Foods – the makers of Sriracha sauce – from shipping until everything could be re-inspected under the new rules in mid-January. Drama with the city of Irwindale continues, as residents kept pushing for a permanent shutdown.

May 2014: It now looks like the city of Irwindale and Huy Fong Foods have finally reached an agreement, so the factory can keep operating without more lawsuits delaying production. Why? The company threatened to relocate to Texas. Money talks.

It looks like this whole thing is finally settled. According to a report from NPR’s The Salt, Irwindale’s city council had a closed-door meeting with the owner of Huy Fong Foods, where they hashed things out. The factory is going to get new filters to help mitigate the chili fumes, and the Council is going to drop the lawsuit against Huy Fong Foods.

So yay, no Sriracha shortage! Were you stashing some bottles away, just in case?