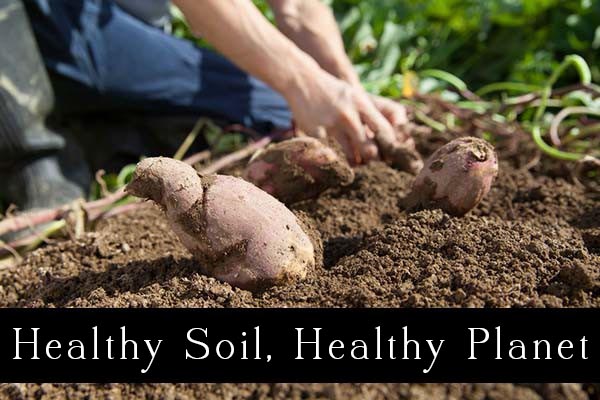 Healthy soil is critical to our food future, and supporting regenerative farming is an important piece of that puzzle.

What if farmers could get paid for growing food AND building a healthier climate? This is practical– and potentially huge– for the health of farms, people, and the planet. Regenerative farming methods can help us sink excess carbon, improve the health of food, and produce an increase in crop output.

Most of the farms around the world are grown under monocropping: one crop, planted repeatedly, surviving only with the input of fertilizers, pesticides, and herbicides. Not only is there no question that chemical intensive and mono-cropped agriculture is for less healthy for people, it’s very bad for the health of the planet.

Organic activist Maria Rodale explains that it is increasingly clear that this chemical-intensive agriculture is damaging to the future of farming: she says over one-fifth of China’s farmland is polluted beyond use. The good news is that it’s possible to fix these issues, and it is the soil that is the key to this climate-change conundrum.

Though soils are often considered just a growing medium, soils are actually teeming with life. Beneficial bacterial and fungi are the basis of life in healthy soils, and building a healthier planet begins by improving the health of the soils. As I recently wrote on Care2, “Healthy soils support life on this planet in many ways, including filtering and regulating water flow into surface water; sustaining plants and animals; filtering pollutants, cycling nutrients like carbon, nitrogen, phosphorus; and giving structure to the land, ensuring that the trees, topsoil and even human structures maintain their place on the land. But perhaps most importantly, when soils are healthy, they store huge amounts of carbon, keeping it out of the atmosphere. But our current methods of agriculture have left us with degraded soils.”

But farmers are not incentivized to improve their soils: often they are working to produce as much food as possible, and they might not find the time or have the inclination to incorporate regenerative farming methods like cover cropping, composting, and soil amendments that improve soil health.

A recent post on NPR’s The Salt food blog explains how some states are working with farmers to create ‘environmental credits’ which can be bought and sold by other companies. Author Grant Gerlock explains that, “A handful of these markets are already up and running.” One of his examples is of California power plants “trading offsets with rice farmers who have changed their cropping practices to cut methane emissions.”

Sadly though, only one of the examples given focus on soil improvements. John Roulac, the founder of Nutiva, explains in his article on EcoWatch how regenerative farming and healthy soils can save us. He says that since the oceans have acidified and the atmosphere is full of CO2, the soil is our final option for sinking excess carbon.

Roulac explains how regenerative farming can help us immediately and healthfully make an impact on climate change:

“If we remove carbon from the atmosphere and oceans by implementing the practices of regenerative organic agriculture, we’ll sequester carbon into the soil and expand the soil’s water-holding capacity. Building organic matter into the soil’s humus layer is essential for growing the healthful foods humanity needs.

As a 2014 Rodale Institute report states, “Organically managed soils can convert carbon CO2 from a greenhouse gas into a food-producing asset.” Two major upsides to this approach are drought-proof soils and, thanks to more nutrient-rich foods, reduced healthcare costs.”

As regulators across the country look to expand conservation credits for farmers, it’s imperative that they look at how farming itself can be a part of this conservation. The ideas examined in the NPR article are more about letting polluters get “credit” from farmers, but why can’t we take this the next step and give farmers credit for rebuilding their soils without having to have polluting industries buy these credits? Can we just give farmers the resources they need to build the soils that improve our food and our planet?

A version of this article originally ran at Planetsave; republished here with permission. Soil image via Shutterstock