A Cornell University study looked at the factors that lead to household food waste and made some interesting recommendations for reducing food waste at home.

The study looked specifically at food waste in low-income families, where reducing food waste would not only have a big environmental impact but also help combat hunger by making the most of their food budgets. They used home interviews to explore the food waste and hunger connection.

Some of the factors the researchers found were pretty unsurprising. An unwillingness to eat leftovers was a big contributor to household food waste, for example. But there was one food waste contributor that I thought was interesting: cooking from scratch.

You know that I’m a big advocate of cooking from scratch, so that one kind of threw me. From-scratch cooking is usually healthier than eating out or making processed food, and I wonder how much that really contributes to our food waste problem.

The study authors also talk about the problem of preparing too much food, so I wonder if folks are deciding that if they’re going to cook, they’re going to COOK, and then making way more than their families can eat?

You can read the full press release from the Cornell Food and Brand Lab below and watch their short video at the top of this page on reducing food waste at home. 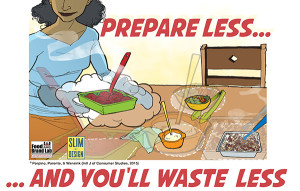 Food wasted means money wasted which can be an expensive problem especially in homes with financial constraints. A new study from the Cornell Food and Brand Lab and the Getulio Vargas Foundation, shows that the top causes of food waste in such homes include buying too much, preparing in abundance, unwillingness to consume leftovers, and improper food storage. “Fortunately,” notes lead author Gustavo Porpino, PhD candidate at the Getulio Vargas Foundation and Visiting Scholar at the Cornell Food and Brand Lab, “most of the factors that lead to food waste, can be easily remedied by simple changes in food buying, preparing, and storing.”

For the study, in-home interviews were conducted with the mothers of twenty lower-middle class families from two suburbs of Sao Paulo, Brazil to collect information about each family’s shopping, cooking, and disposal practices. Each family was also observed and photographed preparing, eating and disposing of food.

Based on interviews and in-home observations, Porpino and co-authors Juracy Gomes Parente, PhD, of the Getulio Vargas Foundation, and Brian Wansink, PhD, Director of the Food and Brand lab and author of Slim by Design,determined that the practice that resulted in the most food waste was simply buying too much food, followed by preparing food in abundance. Leaving foods on dishes after meals or not saving leftovers, and decaying of prepared foods after long or inappropriate storage were also significant factors that resulted in disposal of foods. Furthermore, the researchers found that strategies that are intended to save money such as buying in bulk and shopping monthly (rather than more frequently), and cooking from scratch, actually contributed to the generation of food waste and ultimately did not result in savings.