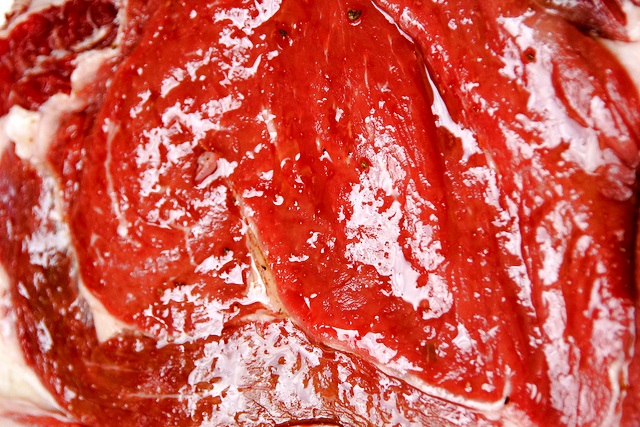 A new study published this week reveals yet another way that meat consumption harms human health. During metabolism, a substance called L-carnitine — found in meat — appears to accelerate atherosclerosis. So yes: cholesterol can clog your arteries, and carcinogens in red meat can cause cancer. But now there’s a whole new reason to say, “Field Roast: it’s what’s for dinner!”

Researchers at the Cleveland Clinic in Ohio, a nonprofit academic medical center, found that during digestion certain intestinal bacteria break down a meat-derived substance called L-carnitine — which isn’t dangerous in its original form — into Trimethylamine N-oxide (TMAO), a compound linked to heart disease.

Study authors compared TMAO levels between 53 omnivores and 23 vegetarians and vegans, after asking them all to eat red meat (presumably it was harder finding plant-eaters willing to participate in the study?).

Among regular meat eaters, TMAO levels nearly doubled after consuming a sirloin steak, just a few hours after consumption. Researchers were surprised to find no similar effects in the TMAO levels of participants who normally ate vegetarian or vegan fare, after eating the same meal.

Gut bacteria play a key role in transforming L-carnitine to TMAO; vegetarians were found to have less of the bacteria required to perform that transformation, so that even when the veggie group was asked to eat meat (editorial comment: ew!), they didn’t have the high TMAO levels observed in the regular-meat-eating group.

Researchers went on to analyze levels in 2,500 people to assess TMAO as a potential risk factor for heart disease; they found it to increase heart disease risk at a level equivalent to high blood pressure, high cholesterol, or smoking.

Researchers are optimistic that this research may help with the early detection of heart disease, and that future studies “may even lead to the invention of an antibiotic pill that can clean the stomach of carnitine.”

Researchers would never suggest not eating red meat!!!! NO NEVER!!! Study author Dr. Stanley Hazen asserts (rather brazenly, it seems to me) that “attempting to avoid carnitine by abstaining from meat is not the best alternative” because carnitine is present in other flesh foods too — and PLUS, red meat (though it might kill you) contains iron, zinc, and B vitamins.

So it’s ok to eat less of it, but please do just keep on eating the s*** even though you don’t need to, and maybe someday they’ll make a pill to save you from this one-of-many problems related to meat consumption.

I love when researchers ignore their own data, to avoid challenging dear and dominant schemas. And that’s super-lucky for me — because it surely seems to happen a lot!

Here’s the thing: we have no nutritional need for ANY flesh foods. The fact that L-carnitine is also found other animal-derived foods doesn’t mean it’s a waste of my time to avoid red meat — it means that such a plan would represent insufficient action.

B vitamins can be found in vegan and vegetarian foods, or (especially B12) boosted with supplements — that’s actually MUCH easier than increasing our risk for chronic disease, debility, and early death by eating animal meat while waiting for future researchers to invent a pill to undo damage caused by meat-derived TMAO (which still, btw, would do nothing about its cholesterol or carcinogen problems)!

reasons to avoid (red and all other types of) animal meat, and — especially in our culture of food abundance — no good ones not to do so. Habit, taste, and convenience are poor reasons to court cancer, heart disease, stroke, and optional debility.

Evidence overwhelmingly supports the hypothesis that more plants and less meat is a great idea:

This latest L-carnitine /TMAO study doesn’t exist in a vacuum — it’s just the latest addition to an an ever-growing tower of data, supporting the position that a plant-based paradigm makes tons of sense for anyone who values health, environmentalism, and/ or compassion towards other creatures.

So here’s my radical idea. Say what your own study shows, guys:  “Maybe people should consider not eating meat, since it seems to be bad for human health in many ways, some of which we’re just beginning to understand.”

There, now, was that so hard?!