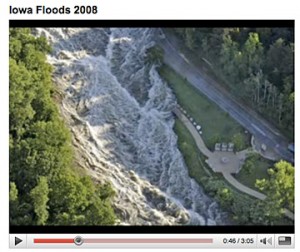 I’ve not posted much yet on the Iowa floods. I think, perhaps, I was holding my breath, waiting to exhale. The exhale is likely to come out more like a long sigh.

While the floods have peaked, Iowans are now dealing with the aftermath. Many of the 36,000-plus who were evacuated have still not returned home. I imagine, when they get there, the real work will begin.

It’s devastating for the state. And, in the wider picture, devastating for all of us. Even if your home was high, dry, and several states away, you, too, will feel the impacts.

Details after the jump.

Water Contamination and Pollution
Iowa has a rather large number of CAFOs (confined animal feeding operations) and agricultural land. When the flood waters rose, nitrate and bacteria including E. coli leached into the watershed, contaminating wells, drinking water, and the waters of the Mississippi in Iowa and states southward, such as northern Missouri, along the river. Contaminants also include agricultural chemicals like pesticides, herbicides and fertilizer.
Ultimately, this will all end up in the already stressed Gulf of Mexico. In Iowa, citizens in the affected areas have no safe drinking water. (http://www.ethicurean.com/2008/06/19/underinformed-and-underwater/)

Food Prices
The floods in Iowa, just as the drought in Australia, will impact food prices. How much and how soon is yet to be seen. Currently, it is thought that about 3.5 million acres of cropland were affected in Iowa, Missouri, Illinois, Indiana and Wisconsin.

Projected grain yields for this year are about nine percent less than 2007. The losses would have been heavier except that more acreage was planted, including planting on marginal lands. Despite the situation not being as bad as expected, we can all expect higher food and fuel prices ahead.

The issue certainly raises the question of risks when you are betting on the weather for food and fuel production both. This panel discussion by hosted by the Environmental Working Group is worth listening to.

Panel members included Keith Collins, who served for 15 years as Chief Economist for the U.S. Department of Agriculture, Economist Bill Lapp, a member of USDA’s National Agricultural Statistics Service Advisory Board, Al Dutcher, state climatologist for Nebraska and Elwynn Taylor, a professor of Agronomy and an Extension Climatologist for Iowa State University.

Certainly, all of us in areas not impacted by the floods are far more fortunate than residents of Iowa and other flooded areas. But we are not isolated from it either. Just as surely as the contaminated waters run into the Mississippi, southward through our nation and then to the ocean beyond, we, too are in the flow, connected, and part of it all.

Related Posts
News and Images from Iowa
Understanding the Impacts of Weather, Food and Biofuel
Farm Aid Donations to Help Flood Victims (How You Can Help)