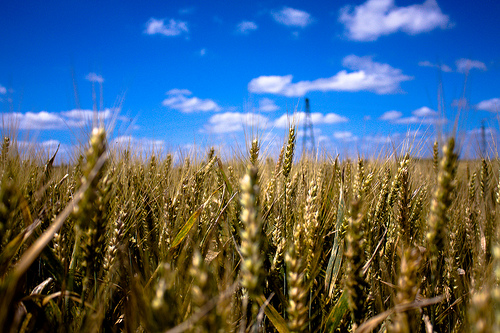 Thank you to reader Vines & Cattle for pointing us to this in our post about Monsanto’s genetically modified alfalfa:

Monsanto and BASF plan to add wheat to the crops involved in a billion-dollar joint venture to develop biotech crops. In a news release this morning, the companies said wheat will join corn, soybeans, cotton and canola as crops targeted for development, with biotechnology used to increase yields and drought tolerance. Earlier efforts to introduce a biotech wheat were shelved after growers and exporters bowed to concerns that consumers would reject products made with genetically altered wheat.

Vines & Cattle is a conventional farmer that grows quite a bit of wheat who I think sums up one of the biggest issues with Monsanto and patented, genetically modified seeds in general: “What I am opposed to is telling a farmer who has never purchased Monsanto’s seed that he now can’t save his own seed.” Monsanto has a practice of suing farmers who’s crops have been cross-contaminated by genetically modified crops in neighboring fields.

The new GM wheat is supposed to be available in 2020, which means there’s still time to get heard! The Organic Consumers Association has a resource center for news and updates about GM wheat which includes a letter that you can automatically send to the President, Vice President, your representatives and the Secretary of Agriculture.