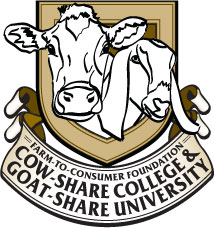 One of the more delicious ways to eat locally is to drink local milk. For most of us, this means raw (unpasteurized) milk. Unfortunately, raw milk is illegal to buy or sell in many U.S. states.

But often there’s a way around it: A herdshare program. Drinking raw milk from a cow you own is not illegal. When a milk drinker joins a herdshare, he’s buying a part of a cow — usually 1/25th of a cow — and paying each month a fee for that partial-cow’s board and care.

I own 3/25ths of a cow (a Jersey named Cinnamon), which I purchased from a local dairy farmer for $50 per share. (If I ever decide to sell my shares, the farmer will buy them back from me for the same price I paid.) Each month, I pay my farmer $22 per share for my portion of the costs of Cinnamon’s care, and each week I drive out to the farm (in Ohio, it’s illegal for my farmer to deliver my milk to me) and pick up 3 gallons of beautiful whole unpasteurized milk. It works out to $5.08 per gallon, which just a few months ago might have seemed like a lot to pay for milk. It was worth it to me because I wanted to buy my milk from a local farmer raising cows on pasture without rBGH — cows living the way cows are supposed to live — and in my area that means raw milk. It’s worth it to others because they want raw milk in particular.

A lot of folks would like to investigate finding local milk in their area but are a little worried by dire warnings from various government bodies — who, influenced by wealthy conventional dairy industry lobbying groups, completely ignore the difference between milk purposefully produced to be consumed raw and conventional dairy farm milk, which is produced with the intention that it be pasteurized before consumption (note: pdf file) — about the dangers of drinking raw milk. But raw milk is as safe as any other unprocessed traditional food as long as the dairy farmer knows what she’s doing. (I wouldn’t recommend drinking raw milk from a dairy farm that isn’t set up specifically to produce raw milk; milk from a conventional dairy farm is not intended to be consumed unpasteurized, and the sanitation requirements are profoundly different.)

Here’s a great way for would-be raw milk drinkers to find out whether a herdshare they’re considering is run by a knowledgeable farmer.

The Farm-to-Consumer Foundation is offering a series of classes on setting up, maintaining, and upgrading a cow- or goat-share operation, appropriate both for farmers at all levels of experience and for consumers interested in the finding out more about joining a herdshare. Classes are conducted via conference call; attendees phone in from their location to join the class. There are three classes to choose from:

Each hour-and-a-half class is available several times throughout September, October, and November. Attendees can pick and choose the classes most appropriate for their needs and select a date for each class that is most convenient for them. All classes are held Thursdays 1:00 – 2:30 Eastern.

If you’re interested, don’t dawdle. Each class is limited to 25 attendees. But if the classes prove popular and you miss your chance, I’m sure they’ll be offered again.