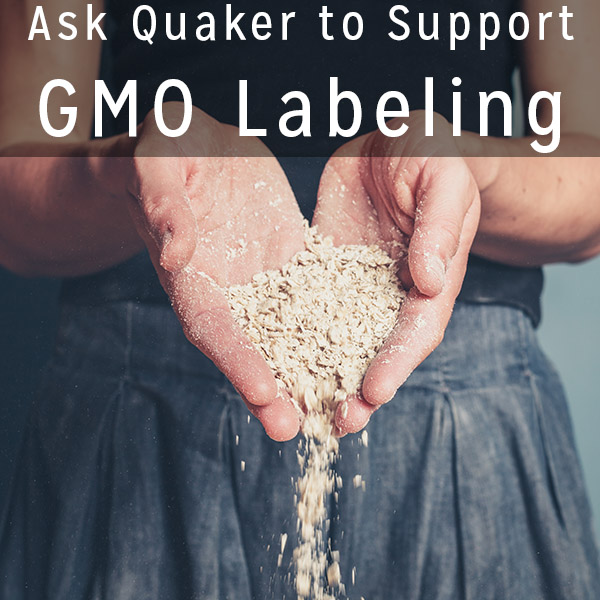 Quaker Oats’ brand is all about honesty, but there’s nothing honest about stopping Americans from knowing what’s in our food. The Just Label It campaign has launched a petition asking Quaker to live up to its reputation and start supporting GMO labeling instead of secretly lobbying against it.

Here’s the plea from the petition-writers:

“Quaker and its parent company, PepsiCo, are spending millions to prevent us from knowing whether there are GMOs in our food. Major food companies combined have spent over $100 million on anti-labeling campaigns and their trade association, the Grocery Manufacturers Association, is supporting a new bill in Congress – The DARK Act – that would prevent mandatory FDA labeling. This new industry-friendly bill will keep consumers in the dark. Unless labeling is mandatory, consumers will not get the information they need to make informed choices.

“Quaker, a brand that prides itself on its honest and healthy image, is not being fully transparent to parents, families and consumers across the country – marketing their products on trust, but funding anti-labeling efforts at the same time.

“Join us in asking Quaker to just label it and support mandatory FDA labeling of GMOs.”

If you’d like to tell Quaker and PepsiCo that you want truth in labeling, you can sign the petition right here.

As consumers, we deserve to know what’s in our food, but food companies are worried that if we know which foods contain genetically modified ingredietns, we won’t buy them, and that’s no surprise. There are health, environmental, and economic reasons to avoid GMOs.

Even if you don’t buy into the direct health concerns associated with GMOs, there is no denying the threat to overall public health. When GMOs first hit our farmland, pesticide use dropped, as advertised. Over the years, though, farmers have had to spray more and more pesticides as superbugs and superweeds become resistant to genetically modified crops and the fertilizers designs to accompany them.

Of course, until we get the food labeling that we deserve, you can always use Jill’s simple trick to spot GMOs on a food label.