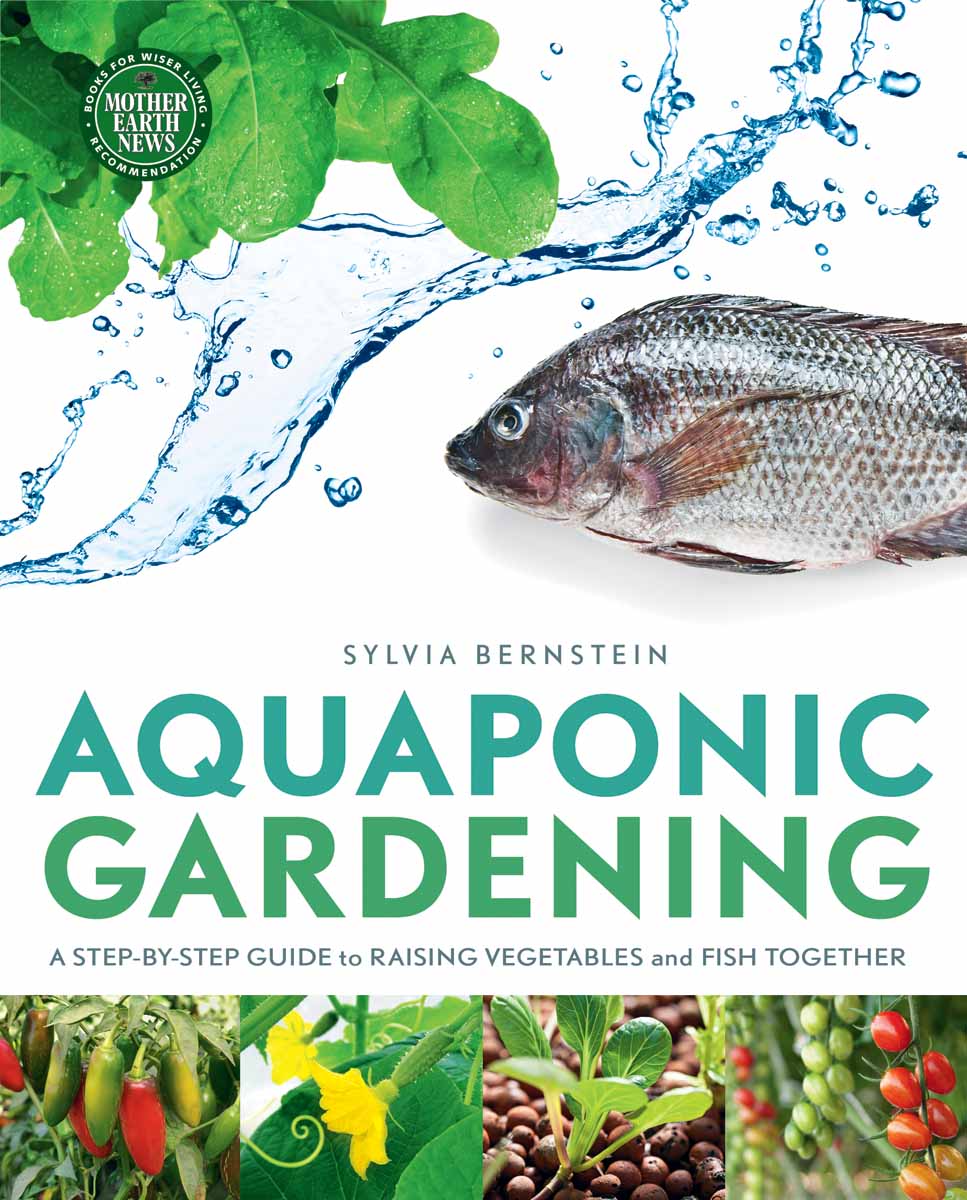 It’s a very cutting-edge food/environmental/sustainability story. Last month, the world populations hit 7 billion people and that number is projected to grow to 9 billion by the year 2050. With the diminishing food sources, there simply wont’ be enough food. Can anything be done? Sylvia Bernstein, and an international group of scientists and gardeners, have come up with a solution: Aquaponic Gardening.

The New York Times ran an article on the efficiency of aquaponic gardening last year, and the movement has only grown in strength since then. I spoke with Sylvia last week about population growth, climate change, food policy and of course, aquaponic gardening.

JK: Welcome Sylvia. First, can you tell is what is aquaponic gardening and why do we need to know about it?

SB: What if I told you that you could catch fish for dinner right in your own backyard?  And what if before you catch those fish they were growing the veggies for the rest of your dinner plate?  Would you believe me?  You should. This is all within reach using a new style of gardening called Aquaponics.

Aquaponics is, at its most basic level, the marriage of aquaculture (raising fish) and hydroponics (growing plants in water and without soil) together in one integrated system. The fish waste provides organic food for the growing plants and the plants naturally filter the water in which the fish live.  The third and fourth critical, yet invisible actors in the play are the beneficial bacteria and composting red worms.  Think of them as the Conversion Team.  The beneficial bacteria exist on every moist surface of an aquaponic system. They convert the ammonia from the fish waste that is toxic to the fish and useless to the plants, first into nitrites and then into nitrates.  The nitrates are relatively harmless to the fish and most importantly, they make terrific plant food.  At the same time, the worms convert the solid waste and decaying plant matter in your aquaponic system into vermicompost.

JK: Can you provide readers with information about your background and how you got involved in aquaponic gardening.

SB: I am a self-described Aquaponics Evangelist, but I wasn’t always that way.  My relevant background started as a long time traditional dirt gardener spanning four backyards over four states.  In 2003 I was hired by the newly forming team at AeroGrow International to do the plant research and development for the soon-to-be-launched AeroGarden Kitchen Garden.  I stayed at AeroGrow for six and a half years, managing the formation and operation of the Grow Lab and Plant.  By the time I left AeroGrow in October of 2009 I was the VP of Marketing and Product Development.  Why did I leave such an interesting job?  In part, it was time to move on.  AeroGrow had become a very different place than the company I had joined so many years ago.  The main reason, however, was to pursue what had become a true passion – aquaponics.

JK: Sounds like things have gotten bad. How have the fishing and agricultural industries changed in the last 10 years? Any general comments, observations, predictions about these industries?

SB: Much has changed about American agriculture – and enabled vast increases in productivity and profitability – in the past 60 years.  In fact, according to Cornell University, in the 25-year period between 1950 and 1975, while the acreage in farming dropped by 6% and the hours of farm labor decreased by 60%, farm production per hour of on-farm labor practically tripled, and total farm output increased by more than half.  New forms of farm mechanization drove less need for labor and greater existing farm hand productivity.   The discovery of DDT and other effective pesticides increased the amount of saleable crops per harvest.  The use of chemical fertilizers doubled between 1940 and 1944.

Sounds great, so what is the problem?   Unfortunately, our impressive agricultural success has been built on three pillars, and those pillars are in trouble.

First, cheap oil. Farmers and our food distribution system use oil in every aspect of modern agriculture, from powering the tillers and seeding machines that plow the earth and plant the seeds, to petroleum based fertilizers and pesticides that feed and protect the crops, to fueling the trucks that transport the harvest over hundreds and thousands of miles to the grocery store.   As our oil supplies dwindle and the price of oil increases, these oil-dependent inputs will be increasingly seen as economically impractical.

Second, the myth of unlimited, pure water. Currently in the United States, 80% of the water we use goes to irrigate our crops, and in some Western states that number reaches 90%.  The problem is that this water is becoming dangerously scarcer, as well as more polluted by the very agriculture that it seeks to nurture.  In early 2009, then California Governor Arnold Schwarzenegger declared that California, arguably the most productive farming state in the country, was facing an unprecedented water crisis. This is not a problem that is going to go away.Groundwater reserves, such as the massive Ogallala Aquifer, supply 40% of the water we use to irrigate our crops.  Also, the pollution of ground water, related to nitrogen fertilizers and pesticides, from widespread, routine land application, as well as point sources has become a serious concern.

Third, we are simply wearing out the fertility of our soil.  Soil compaction from mechanized equipment has caused a loss of as much as 25 – 50% of yield and 74% of the agricultural land in North America has been defined as “degraded.  Pesticide use on U.S. farms has risen ten-fold over the past 40 years as agriculture has intensified. These pesticides are killing not only plant-harming insects (although increasingly less effectively) but also critical, living elements of the soil ecology that help it to naturally regenerate, i.e. bacteria, fungi, worms, and beneficial insects.

The good news is that we have a proven agricultural system in use today that provides the solution to all of these issues…and more.  It is a called aquaponics. So, how can aquaponics solve the three problems noted above?

Growers can construct Aquaponic systems entirely out of recycled materials. Further, the operating systems require no oil-based inputs.  They run entirely on a small amount of electricity which can be generated through currently available renewable energy methods.  Further, because there is no need for weeding, watering or fertilizing; aquaponic farms can be run by a single person without the need for gas-powered equipment.  Because an aquaponics system does not come in contact with the ground, there are far fewer insect problems and thus far less need for pesticides.  As an added incentive, the system must remain free of petroleum based pesticides to avoid harming the fish.  Finally, there is obviously no need for petroleum-based fertilizers since the bacteria-converted fish waste feeds the plants with organic, natural plant food.

Because aquaponic systems are recirculating, the only water they use is either within the plants themselves, transpires through their leaves, or evaporates from the top of the fish tank.  These minimal “loss” points are the reason that aquaponics is generally thought to use less than one tenth of the water of traditional agriculture for the same crop output. Plus, because aquaponic water is never exposed to fertilizers or pesticides, there is no chance of polluting the groundwater systems with chemicals.

While aquaponics can’t restore the results of past agricultural practices, it can side-step the problem.  Because aquaponic systems use no soil themselves and because they can be built on any surface, they can be erected anywhere there is level ground and a source of sunlight or artificial grow lights.  This includes land that is poisoned beyond repair, urban settings like parking lots and warehouses, and home environments like patios, decks, basements, and garages.

Aquaponics is not the answer to all of America’s future food supply and environmental issues.  Grains and root crops, for example, will probably always be most efficiently grown in the soil.  But for above ground, vegetative crops and animal protein, there simply isn’t a better growing technique for our country’s future food security.

JK: What is the coolest fact about aquaponic gardeining that you can share?

SB: The coolest fact about aquaponic gardening is that I have serve fish for dinner that was swimming just half an hour ago.  You can’t beat that for fresh!

JK: Is there one key tip you can offer readers?

SB: My key tip for your readers is to just get started!  It is not hard, nor is it expensive, once you understand some key rules of thumb.  Everyone can be growing their own fresh, safe, healthy fish.

Honestly, Google is now my favorite cookbook.  I love that I can type in a key ingredient or two and it will provide me with recipes, ratings, and tips from others who have made the same recipe.  I have a closet full of cookbooks but most of them are now collecting dust.

JK: Anything I’ve forgotten to ask?

SB: I would like to highlight one more benefit of Aquaponics. Fish are a healthy, efficient, and safe alternative to meat. It seems that every week we see a news item about an E coli outbreak or a story about the harm that the Concentrated Animal Feeding Operations (CAFOs) are doing to the animals, the environment and the safety of the resulting meat products. By contrast, fish, are cold-blooded animals and therefore cannot harbor E coli (unless, of course, they are contaminated with the pathogen from an external source during processing).  In addition, one must remember that an aquaponic system is an eco-system in which all the living inhabitants depend on each other.  Thus, aquaponic growers never add antibiotics, growth stimulants, and other medicines because such additives would reach not just the fish but also the plants, bacteria and worms that live in the system (growers add worms to the plant grow beds to help convert solid fish waste into plant food);  thereby threatening the health of the entire system.   Plus, in the U.S. livestock is responsible for an estimated 55% of erosion and sediment, 33% of pesticide use, and 50% of antibiotic use.  Finally, it only takes one and a half pounds of feed to produce one pound of fish, vs. eight to ten pounds of feed to produce one pound of beef. Fish farming is a far more efficient use of our feed crops than growing meat.

Here is the rest of the story

Sylvia Bernstein is the author of Aquaponic Gardening, and founder of AquaponicsCommunity.com and The Aquaponic Source, a company that brings aquaponics education, community and products together under one roof.