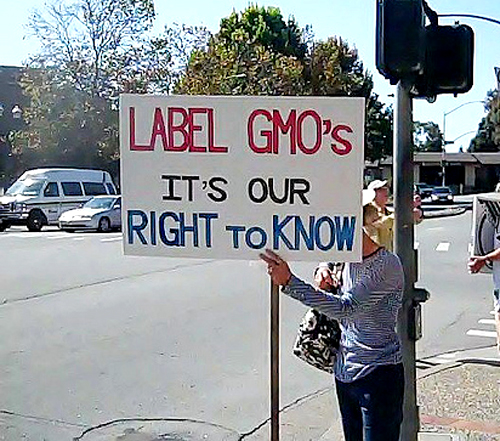 Organic food blogger Max Goldberg is teaming up with Food Babe to raise money to support Prop 37, a ballot initiative in California that would require GMO labeling. Why are folks on the other side of the country getting involved to support GMO labeling in a whole different state?

The answer is pretty simple: because this initiative is a big deal, and because the huge corporations fighting against Prop 37 certainly aren’t limited to California-based companies.

Huge corporations like Monsanto, Hershey, General Mills, and Dean Foods are spending big money to cloud the debate and convince folks in California that they don’t need to know what they’re eating. What’s even more surprising is that these companies are also using cash from their “natural foods” arms to oppose GMO labeling. Dagoba, which is owned by Hershey, for example, is opposed to GMO labeling, as are General Mills subsidiaries Larabar, Muir Glen and Nature Valley.

Goldberg says that proponents of truth in labeling are “being outspent $32 million to $3 million, or nearly 11-1” by corporate money opposing Prop 37. It’s shameful that these corporations are trying so hard to squelch our right to know just because it might hurt their profits if consumers could actually make informed choices about the food we’re buying. As Tanya pointed out in her piece about the Prop 37 battle:

Prop 37 Fundraiser and How You Can Help

Prop 37 would have an impact beyond California, and with huge corporations throwing big money around to stop it from passing, the folks fighting for GMO labeling need our help. If you live in New York, you can get deets about the October 1st fundraiser over at Living MaxWell.

Even if you’re not in New York or California, you can still get involved! Anyone who wants to can donate to support the Yes on 37 group. You can also organize your own local fundraiser and donate the proceeds to Yes on 37.

Like I mentioned above, it’s mostly large food corporations that are opposing the California Right to Know Act, and one thing you can do right now is vote with your dollar. Stop buying from companies that are spending big bucks to oppose our right to know.

Just as consumer pressure convinced Chick-fil-A to stop funding anti-gay hate groups, if we show corporations that we won’t support them if they behave this way, they just might think twice about it. For huge companies like these, it’s all about the bottom line.