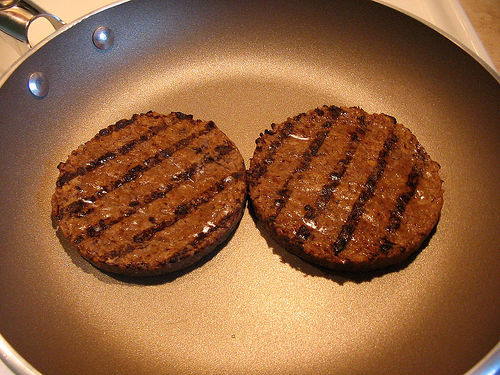 I’ve known many vegetarians and vegans that subsist on processed foods. Giving up meat doesn’t necessarily make it easier to avoid the pitfalls of the Western diet, after all. Frozen veggie burgers, “chicken-less” nuggets, soy cheese, and seitan sausages often seem more convenient than cooking a meal of plants, grains, and beans.

But given that global meat production accounts for almost a fifth of all greenhouse gases, a store-bought veggie burger is probably more eco-friendly than a beef burger, right?

Not so says a recent story in Mother Jones. In this article, Kiera Butler points out that processed vegetarian food might be just as bad for the environment as meat.

According to Gidon Eshel, a geophysicist who examines the environmental consequences of food production, processed vegetarian foods are not more sustainable than meat.

… Eshel believes most veggie burgers are the caloric equivalent of “shooting yourself in the foot.” A 2009 study by the Swedish Institute for Food and Biotechnology found that while producing a plate of peas requires a fraction of the energy needed to produce the same number of calories of pork, the energy costs of a pea-burger and a pork chop are about equal.

Butler’s story is a good reminder that being an eco-eater isn’t as easy as giving up meat. Eliminating processed food from your diet requires planning and logging hours in the kitchen, but if you want to eat sustainably, an unprocessed, plant-based diet is the way to go.

To read the full article in Mother Jones, click here.

Image courtesy of Chris Campbell via a Creative Commons license.