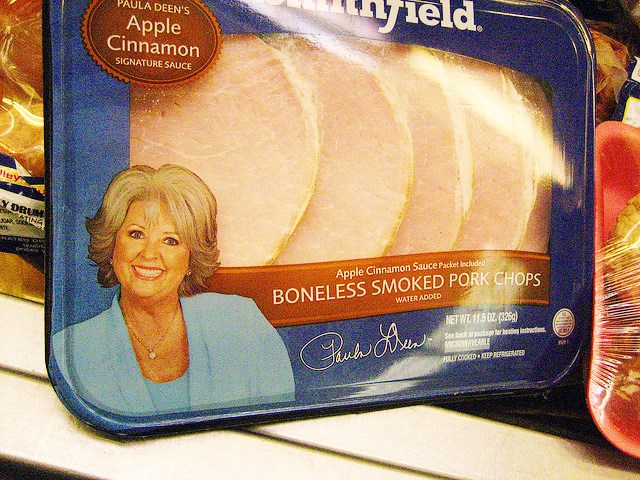 I’ll make this short and sweet, because the subject matter is distasteful no matter how you slice it. But following a week or so of full-throttle media frenzy and public mea culpas, in which Paula Deen’s butter-soaked bacon-wrapped food empire seems to be doing a slow-motion crash-and-burn, the strangest aspect of the Paula Deen scandal seems to be what it isn’t.

If you’ve been doing Real Life lately, maybe out gardening or riding your bike instead of watching the news or surfing the foodie blogosphere, let me bring you up to speed: Paula Deen has been having quite a time lately (bless her heart)! Apparently she and her brother Bubba are facing a major lawsuit, for sexual harassment and creating a hostile work environment and such. In the course of legal proceedings, Deen recently admitted to using ‘the N word’ to refer to a person of color with whom she had (pardon the pun) a beef.

Since that admission, she’s lost sponsors left and right. The Food Network dropped her like a hot potato; Target and QVC dumped her; Walmart bailed; and Smithfield no longer wants Deen as spokesperson for their factory-made feaux-Southern-fried-homestyle-ex-pig products, because — are you ready for this?! wait, first swallow your drink so you don’t laugh it out your nose — ‘Smithfield is determined to be an ethical food industry leader’…. bwahahaha! Ah, those (very very creative and) funny guys!

I guess if they can give themselves an environmental award, they can just give themselves another one for ethical behavior, amiright?! Um, yeeeeeeaaaaaah, NO. Like Deen’s deep-fried cheesecake, that spin is a bit rich and fatty for my taste.

While racism goes nicely with the image Deen has so carefully cultivated — I’m from the South myself, and in my experience racism there is still as common as the bacon and grits it’s so often served up with — unfortunately it’s kind of a PR nightmare for Deen and her publicist(s). Since we’re now well and truly moving through the 21st century, here’s the thing: many people find such racist speech (and alleged habits) pretty darn disgusting.

BUT, never fear! Lots of white people apparently LOVE (not only fried food wrapped in bacon and drenched in butter, but also) Paula Deen; and they really super duper don’t mind if she uses the N word. I mean, she’s sorry and all: what do you people WANT from her, anyway?! (tsk, headshake… mmmm, comfort-bacon and fried butter balls!)

I’ve never met Ms. Deen; maybe she’s racist right down to her toes, but maybe she’s just a victim of that darn liberal media. In either case, watching the train wreck that is now her career — mirroring her declining health (which got her a nifty sponsorship, at least! oh wait, nevermind) — it’s hard not to feel bad for her, as a human being struggling through difficult circumstances.

But at the same time, the ongoing public outrage is warranted — though it’s many years late, and largely misplaced.

Racism is a problem, and deserves aversion. Yes. But seriously, you guys: in the midst of an obesity epidemic, when diet drives all our top killer diseases, when so many millions suffer optional debility and early death because of (diet-related) stroke, heart disease, diabetes, and cancer… when atrocities are exposed every single time someone slips a camera into a pig factory, or dairy operation, or CAFO…

When everything Ms. Deen’s career was built on compiled the most harmful kitchen habits known to modern humanity: only one question qualifies this fiasco as full-fledged scandal.

What took us so long to name it scandalous?