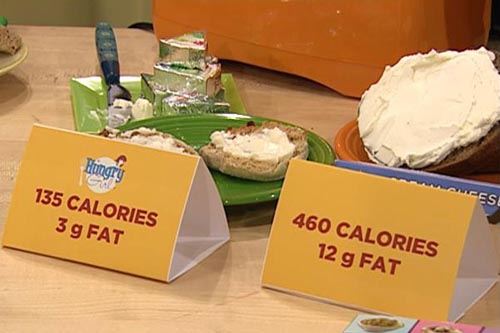 Last Wednesday, two of my favorite foodies were on tv doing a segment about “guilt free” eating. Using simple substitutions, I learned I can save more than 200 calories by switching my morning bagel to an English muffin with Laughing Cow low-calorie cheese spread and almost 1,000 calories by switching from fettuccine alfredo to tofu noodles and light cheese. Simple changes that make decadent foods more health-conscious, what’s not to love?

For some people, quite a bit, actually. The foodies in question are Rachel Ray and Lisa Lillien — women who love talking about food in a way that doesn’t make a person like me feel overwhelmed. But their philosophies for simplicity, healthy substitution, and fun in cooking don’t always mesh with the more serious demands some food activists make. What I’m still not sure of is whether there’s a compromise to found somewhere in the middle?

The first figure, Rachael Ray, is a tv cooking show diva and growing multimedia queen. Serious foodies often criticize Ray because she rejects fancy ingredients and complicated recipes in favor of simple meals you can make quickly with ingredients you already have.

Agree or not, Ray is clearly appealing to an audience; she hosts four television shows, has written 16 cookbooks, and organizes a nonprofit food organization. Her magazine, Every Day With Rachel Ray is going strong while prototypical foodie magazine Gourmet was just shut down. Love her or hate her, Ray has found an audience that continues to grow.

The other popular and often criticized food figure in the segment is Lisa Lillien, aka Hungry Girl. Lillien’s cookbooks, newsletter, and philosophy embrace processed foods that can be used to help make low-calorie substitutes of foods that traditionally trip up dieters. Nutrition is important for Lillien, but she makes her money providing simple substitutions to make traditionally off-limits diet food more palatable and healthy.

She has more than 26,300 followers on Twitter and more than 85,200 fans on Facebook, where she recently encouraged followers to send in the most inaccurate food labels they could find. Her daily e-mail newsletter just passed the 800,000 subscribers mark. When her newest cookbook, 200 Under 200, came out, Lillien was criticized by some diet experts who said her recipes and philosophy didn’t do anything to fundamentally change the way people eat – just making “bad foods” have fewer calories doesn’t help people actually eat better. It may be “guilt free eating,” but is it really healthy?

Lillien countered the criticism the same way she responds in her daily newsletter when she gets the question from fans: “What I like to do is seek out decadent guilt-free foods that make awesome swaps for the real stuff — things that make you feel like you’re eating fattening foods when you really aren’t.”

From my own experience, I can see Ray and Lillien serving a transitional role in a larger shift in American food culture. When I first started to diet, Lillien’s suggestions helped me switch from a diet of cafeteria cookies and frozen pizza to one that voluntarily incorporated vegetables. I used (and still use) Ray’s recipes when I want to cook something tasty without using my entire evening. But I’m moving away from both of those things towards a food philosophy that is slower, more natural, and closer to home.

That’s what good foodies would want, but I have to admit I couldn’t have gotten here without Ray and Lillien. I think their popularity indicates that a lot of other people feel the same way.