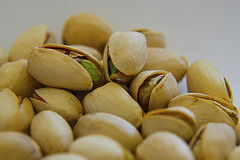 After my family and I enjoyed several handfuls of pistachios at a get- together last weekend, I was surprised to hear yesterday about the latest food recall.

Federal food officials are warning Americans to avoid any food containing pistachios because of possible salmonella contamination.  (Just like the recent problems with peanuts.)

All of this food recalling makes a person wonder if anything is really safe to eat anymore?

In the past it wasn’t uncommon to hear of illnesses caused by foods like shellfish, hamburger, or undercooked pork and chicken.  This didn’t cause much concern for non meat eaters like myself…but now with foods like spinach, tomatoes, peanuts, and pistachios being possible sources of salmonella poisoning in recent months, it’s hitting much closer to home.

Although I suppose we shouldn’t go around being obsessive compulsive about germs on our food, maybe we should take this as a sign that it’s time to go back to the days of growing more of our own food, joining a CSA, or supporting the local farmer’s market.

If more of our nation’s food was supplied to communities by smaller local farms instead of huge food processing corporations, maybe we wouldn’t have the food scares that are now becoming all too common.