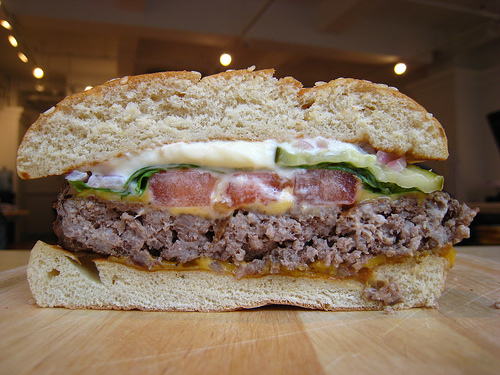 In case you needed another reason to skip that fast food burger at lunch, we’ve got one for you. It turns out that several fast food chains include something called “pink slime” in their secret recipes.

Grist reports on pink slime, which is possibly the grossest thing you never knew about fast food hamburgers:

it’s “the cheapest, least desirable beef on offer — fatty sweepings from the slaughterhouse floor, which are notoriously rife with pathogens like E. coli 0157 and antibiotic-resistant salmonella. (Beef Products, Inc. or BPI) sends the scraps through a series of machines, grinds them into a paste, separates out the fat, and laces the substance with ammonia to kill pathogens.”

Pink slime is an additive in 70% of the ground beef in the U.S., which means that if you’re eating a burger, there’s a good chance you’re getting a dose of the stuff. Pink slime isn’t just in U.S. ground beef, though. BPI deals with other countries as well. Not only that, they’re looking to expand their market share, stating that their:

ultimate goal is to have our products incorporated in all ground beef and other further processed meats produced in the United States. Our products can also be found in Canada, Mexico, and Japan with expansion plans for Central America, Europe, and Pacific Rim countries.

How to Avoid Pink Slime

Of course, you could avoid meat all together, but for folks that aren’t quite ready to take the leap, there are some things you can do.

Avoiding fast food burgers is a good start, since BPI uses the additive in ground beef for the fast food industry. Hotel and restaurant food isn’t necessarily slime-free though.

Your best bet is to stick with local ground beef from a farmer you know and trust.

[via The Good Human]