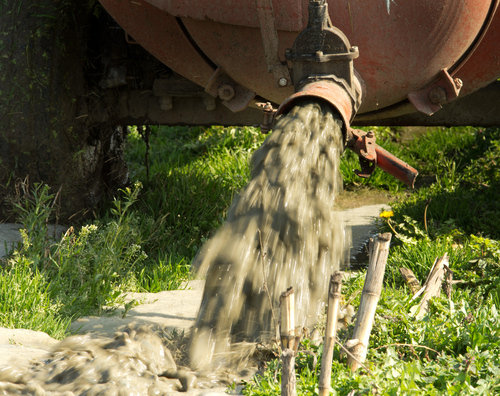 North Carolina residents aren’t the only people fed up with pig farming and its impacts on their quality of life. Iowa is also seeing a backlash to pig farm pollution.

Pollution from pig farming is making local water unsafe for some residents to drink. The problem? Pig poop. According to a report by food activist Barry Estabrook, water utility Des Moines Water Works can’t keep up with the dumping from upstream industrial pig farms.

Industrial hog farms in the Des Moines area are polluting the water with waste from their operations, and it’s causing the water to have unsafe levels of nitrates. Des Moines Water Works has filtration systems in place, but they’re not able to filter out all of the nitrates in the water. Nitrate levels in Des Moines are reaching the upper limits that EPA has set for safe drinking water.

What’s wrong with nitrates? These are the same chemicals found in processed meats. They’re linked to cancer. Nitrates can also cause something called “blue baby syndrome.” Blue baby syndrome is a potentially fatal condition where very young babies have insufficient oxygen in their blood. Their skin will actually start to turn blue. Blue baby syndrome has many causes, but dietary nitrates are one major culprit. If Des Moines parents are using tap water to reconstitute their powdered formula or giving tap water to their babies, their babies are at risk. Many families use powdered baby formula, because it keeps longer and costs less.

Related: Breast is Best, But Guilt is the Worst

Pig farming isn’t just polluting water and harming human health. It’s also costing residents money. The denitrification system that Water Works is forced to use costs residents around $7,000 each day. Water Works has to run the system all day, every day because of pollution from pig farming.

The utility is fed up, and this week it announced that it’s going to sue the counties housing these industrial pig farms unless they do something about the pollution. The operations have 60 days to clean up their acts before the utility files suit.

Industrial agriculture is a huge part of Iowa’s economy, and that means big ag lines many local politicians’ pockets. With politicians determined to look the other way, citizens and local businesses are turning to litigation.

Estabrook points out that this isn’t the first time Iowa businesses and residents have taken action against industrial pig farming operations. The group Iowa Citizens for Community Improvement has filed two suits in the last three years against industrial farming operations.The most recent suit was in 2013. A grassroots group sued Maschhoffs, LLC, a factory pig farm, for dumping pig waste into a local waterway. If that suit is successful, it could mean stricter regulations for pig farms in Iowa.

Dumping isn’t the only way that industrial farming pollutes local water supplies. Companies can actually sell toxic waste to farmrs for us as a fertilizer. That means farms are spraying toxic chemicals onto crops, and the runoff pollutes waterways.