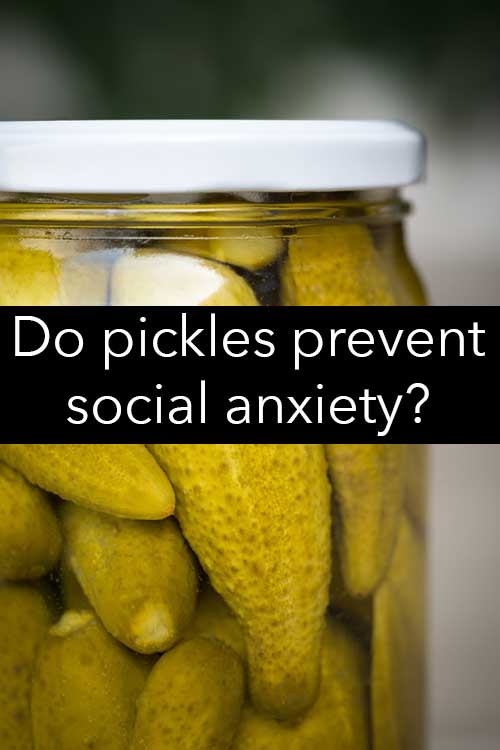 There’s a new study about food and anxiety that some folks are calling “The Pickle Study.” But can eating pickles really help ease social anxiety?

The short answer is: maybe.

Pointing to pickles seems to miss the gist of the research a little bit. What the researchers found is that eating fermented foods may help with social anxiety.

Not all pickles are created equal, though, so if you’re looking for the benefits of fermented foods, you want to choose carefully. While you can make pickles using fermentation, many of the pickles on store shelves don’t contain much in the way of beneficial bacteria.

The link between gut health and happiness is nothing new. Previous research has found that probiotics can improve mood and help us cope better with stress. It makes sense that those benefits would help with social anxiety as well. Another study suggested that fermented foods might even help toddlers to cope better with the emotions behind the “terrible twos.”

Study author Matthew Hilimire explains that, “It is likely that the probiotics in the fermented foods are favorably changing the environment in the gut, and changes in the gut in turn influence social anxiety. I think that it is absolutely fascinating that the microorganisms in your gut can influence your mind.” 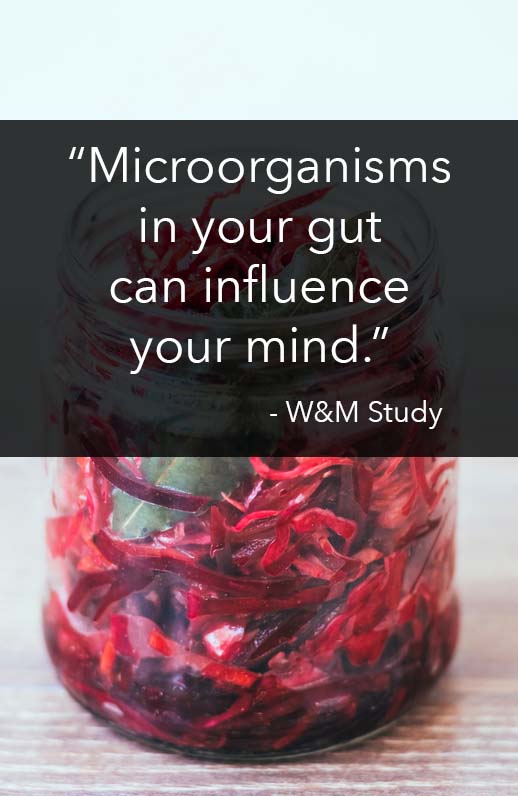 The gut health-mental health connection really is fascinating. Even more interesting: the more anxious you are, the more probiotics can help you.

There is definitely more research needed before we can say for sure that fermented foods help with social anxiety, but the research so far is promising. This study used surveys to see how anxious people felt, and the researchers are working on designing studies that would give a stronger correlation.

Hilimire says, “Assuming similar findings in the experimental follow-up, what it would suggest is that you could augment more traditional therapies (like medications, psychotherapy or a combination of the two) with fermented foods – dietary changes – and exercise, as well.”

The great thing about findings like these is that adopting these habits can’t hurt you. Eating fermented sauerkraut or heading out for a walk or run have proven health benefits. We can consider this new research a potential fringe benefit.

Want to read more? You can check out the full press release for the study below.

Psychologists have traditionally looked to the mind to help people living with mental health issues. But a recent study led by William & Mary researchers shows that the stomach may also play a key role, suggesting that the old adage “you are what you eat” is more than a cliché.

W&M Psychology Professors Matthew Hilimire and Catherine Forestell recently joined with University of Maryland School of Social Work Assistant Professor Jordan DeVylder to investigate a possible connection between fermented foods, which contain probiotics, and social anxiety. The researchers found that young adults who eat more fermented foods have fewer social anxiety symptoms, with the effect being greatest among those at genetic risk for social anxiety disorder as measured by neuroticism.

The journal Psychiatry Research accepted the study in April for publication in August.
“It is likely that the probiotics in the fermented foods are favorably changing the environment in the gut, and changes in the gut in turn influence social anxiety,” said Hilimire. “I think that it is absolutely fascinating that the microorganisms in your gut can influence your mind.”

The researchers designed a questionnaire that was included in a mass testing tool administered in the university’s Introduction to Psychology courses during the fall 2014 semester; about 700 students participated. The questionnaire asked students about the fermented foods over the previous 30 days; it also asked about exercise frequency and the average consumption of fruits and vegetables so that the researchers could control for healthy habits outside of fermented food intake, said Hilimire.

Although the researchers were pleased to see the findings so clearly support their hypothesis, the study is just the first in a series they have planned to continue exploring the mind-gut connection, including another examination of the data to see whether a correlation exists between fermented food intake and autism symptoms, said Hilimire.

The researchers will also soon create an experimental version of the study. Without that experimental phase, the researches can’t make a causative connection between eating fermented foods and reduced social anxiety.

“However, if we rely on the animal models that have come before us and the human experimental work that has come before us in other anxiety and depression studies, it does seem that there is a causative mechanism,” said Hilimire. “Assuming similar findings in the experimental follow-up, what it would suggest is that you could augment more traditional therapies (like medications, psychotherapy or a combination of the two) with fermented foods – dietary changes – and exercise, as well.”

DeVylder noted that research over the past several years has increasingly supported a close relationship between nutrition and mental health. “This study shows that young adults who are prone towards anxiety report less social anxiety if they frequently consume fermented foods with probiotics. These initial results highlight the possibility that social anxiety may be alleviated through low-risk nutritional interventions, although further research is needed to determine whether increasing probiotic consumption directly causes a reduction in social anxiety,” he said.