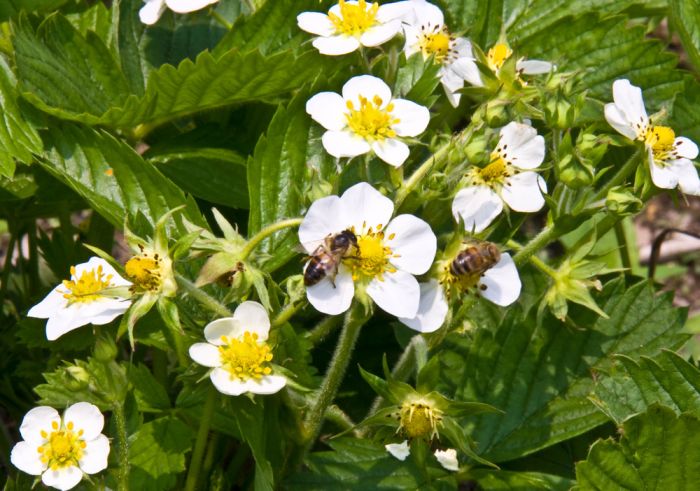 Pest control delivered by bees may seem like a strange idea, but test studies have shown remarkable promise.

The technique, called bee vectoring technology, is simple. As bees leave their hive, they walk through a tray containing pest control agents. The pest control sticks to the bees’ hair and legs. When the bee lands on a flower, not only do the bees pick up and drop off pollen, but some of the pest control is also left behind.

The pest control is made up of a fungus called Clonostachys rosea, which is a parasite to other fungi and some nematodes. It is not dangerous to bees. The fungus is also locally-sourced – it grows naturally on plants and in many soils worldwide, although not in large concentrations – so there is no risk of introducing an invasive pest.

The idea was tested on several crops, including strawberries in the field and tomatoes in a greenhouse. Strawberries are one of the “Dirty Dozen” because of pesticide use on them.  Strawberries that remain wet for a length of time can be infected by grey mould, a fungus that renders the strawberries inedible. The bees track the pest control onto the strawberries while the strawberry plants are in bloom. The pest control agent out-competes the botrytis fungus for nutrients, thus killing off the problem organism. The test study found the microbes used were “equal to or better than with chemicals”.

Another test study involved greenhouse tomatoes. The bee vectoring technology produced dramatic results, with a 90% reduction in grey mould infections and a more than 90% reduction in whitefly and thrips populations. No chemicals were used in the greenhouse during the trials.

The studies were performed by researchers with the Canadian government using bumblebees. The technology is commercially available from Bee Vectoring Technology, using both bumblebees and honeybees. It has the possibility of being accepted for use in certified organic operations.