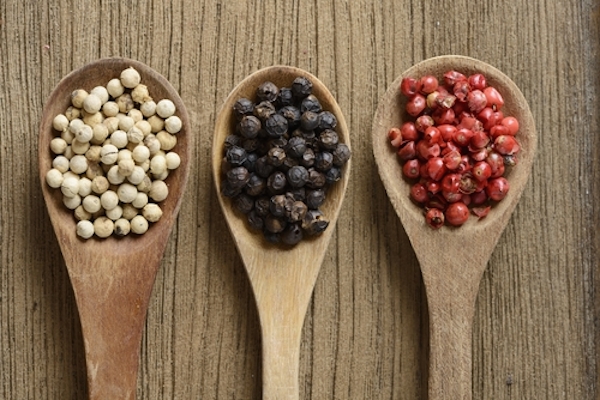 Our bodies require salt for survival, but I honest-to-goodness could not live without freshly ground black pepper. And while salt gets a lot of attention these days — with its fancy French names, people smoking it, people infusing it — we don’t talk much about trusty, often underappreciated peppercorn.

Alison Spiegel at Huffington Post agreed and recently wrote a superb summary of “Everything You Need To Know About Peppercorns, The Most Widely Used Spice In The World.” Here are the 10 things she thinks you should know:

If You Aren’t Grinding Your Own Pepper, Here’s What You Should Do

One: Get out today and buy black peppercorns from a reputable source. I favor the India Special Extra Bold Black pepper from Penzey’s. Consider also buying peppercorns in other colors. Each has a distinct taste, and they can be used in combination.

Two: Buy yourself a wicked good pepper mill with the ability to adjust the coarseness of the grind. I inherited a Turkish brass mill that works like a machine. I’m now planning to buy a small travel mill so I never need be without my favorite spice.

Three: Start cracking. Try different grinds. I love a good dose of coarse ground black pepper on almost anything I eat. You can get a super-duper coarseness by putting the peppercorns in a plastic bag and smashing them with a heavy skillet or rolling pin. (The rolling pin method is quite therapeutic.) This is called cracked black pepper and is essential for a good steak au poivre. It also makes homemade barbecue sauce zing.

Four: Make some Cacio e Pepe — a pasta dish that celebrates peppercorns. It’s an easy-to-prepare dish and a favorite in our house.

Five: Leave comments below to let us know if you’ve made the switch from that nasty, pre-ground, black dust to the sexiest spice in the world. What do you think? Isn’t it awesome?