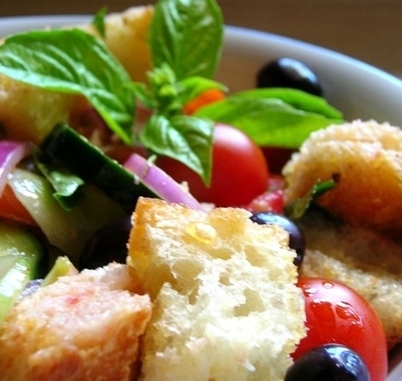 Although Panzanella was created out of the need to do “something” with leftover bread, this traditional Tuscan salad is far from the ordinary, not a cliché and certainly not an afterthought. To me, this bread and tomato based salad is the epitome of local, seasonal and flavorful.

One of my culinary passions is bread baking – partially due to my friendship with my colleague master bead maker, author and teacher Peter Reinhart. There is always a loaf or two of something in my kitchen or freezer. Add the fact that our garden is currently bursting with heirloom tomatoes, cucumbers, basil and garlic and the equation adds up to Panzanella.

To Prepare the Panzanella: Preheat oven to 350°F.

In a large bowl, toss together the bread and extra virgin olive oil and season with salt and pepper. Place bread  in a single layer on a baking sheet and bake in the oven until golden brown, about 15 minutes.

In a large bowl, combine the toasted bread, tomatoes, onions, cucumbers, celery, basil, garlic and olives. Drizzle the vinegar, and oil and season with salt and pepper.

Advance Preparation: The salad should be dressed 10 to 15 minutes before serving to allow the bread  to absorb the liquids.

Substitutions and Options: Panzanella is not only a great light lunch all by itself but makes a fantastic side dish to a grilled piece of poultry or mild sautéed fish fillet. I prefer this more traditional version of Panzanella but if you wish, you can add diced sweet peppers or summer beans.

Wine Notes: Tuscan food revolves around the trio of bread, olive oil, and wine. As with the Heirloom Tomato and Summer Squash Torte, a Sangiovese-based red wine (the grape type in Chianti) will work perfectly with the tomatoes and garlic in this dish. Recommended: For a drinkable, everyday inexpensive red that is distinctly Sangiovese try the Tandem Winery, Gabrielli Sangiovese, Redwood Valley, California. For an affordable Super Tuscan-style Sangiovese try the Walla Walla Vinters, Columbia Valley Sangiovese, Walla Walla, Washington.

Makes one 6 to 8 entrée serving