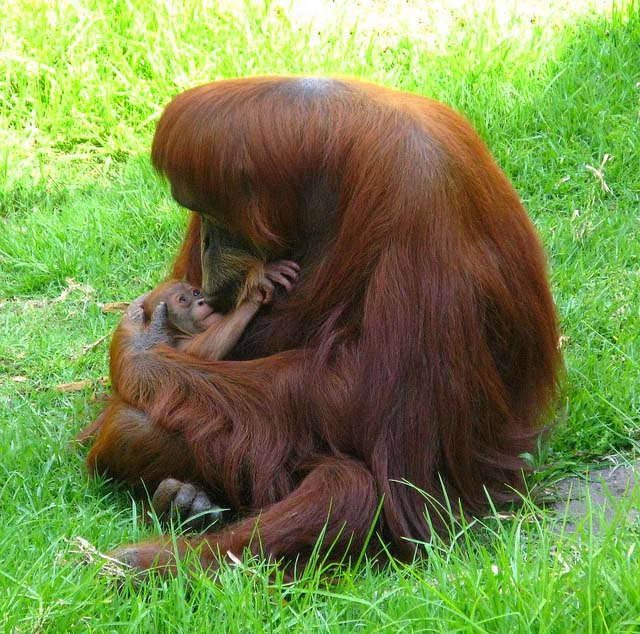 Ask any vegan or vegetarian, and they’ll tell you: momentary pleasure makes a poor moral compass. Killing in the absence of need, for no better reason than transitory taste sensations, seems to many of us like an incredibly bad idea. People choose to follow a plant-based diet for numerous reasons, but one of the most commonly cited is compassion towards fellow creatures.

If we are going to commit to conscious eating, and embrace a diet that rejects killing for no better reason than random human whim, we need to pedal that bike all the way into the garage and reconsider our willingness to support the palm oil industry. Palm oil production causes tremendous death and destruction, and deserves no place at a compassionate table.

The problem is not new, but the escalating rate of species and habitat decimation is increasingly stomach-turning. Vegan foodies, conservationists and bloggers have voiced concern over the ethical implications of palm oil consumption for at least the last couple years. A 2010 post titled Earth Balance is not Vegan explores some of the reasons palm oil seems problematic, to some compassionate eaters.

If you still eat dairy, you may not realize how big a deal palm-oil-containing Earth Balance is, on the ‘hard-to-give-up’ list: it cooks like butter, and has been a longstanding magic favorite ingredient for vegan cupcakes, pie crusts, gravies, and all kinds of recipes where traditional cooks use butter.

I admit it: I resisted. I cut palm oil consumption way down, after initially reading about the wildlife-decimating slash-and-burn rainforest destruction by palm plantations. An estimated 1 in 10 processed foods contain palm oil, and most of the time it was easy to just read package labels and leave those items out of my cart. But every now and then, I wanted cupcakes. I wanted creamy nooch-sauce for nachos or potatoes. I wanted flaky pie crusts.

I bought the Earth Balance.

Last week, I read some things that shamed me. According to ABC News,

Hundreds of critically endangered orangutans in western Indonesia could be wiped out by the year’s end if palm oil companies keep setting land-clearing fires in their peat swamp forests, conservationists warned Thursday.

“They are just barely hanging on,” Ian Singleton, conservation director of the Sumatran Orangutan Conservation Program, said of the Sumatran orangutans who live in the Tripa forest on the coast of Aceh province. “It is no longer several years away, but just a few months or even weeks before this iconic creature disappears.”

The fires set by palm plantations are burning orangutans and other rainforest species into oblivion. As a recent Reuters article reports,

Graham Usher, a member of the coalition [to save Tripa] and a landscape protection specialist, said satellite images showed forest fires had been burning in Tripa since last week, and if allowed to continue they could wipe out orangutans already forced onto the edge of remaining forests.

“If there is any prolonged dry spell, which is quite likely, there’s a very good chance that the whole piece of forest and everything in it, so that’s orangutans, sun bears, tigers, and all the other protected species in it, will disappear in a few weeks and will be gone permanently,” he told a news conference.

I’ve contributed grocery dollars to this kind of enormous and irrevocable loss, for no better reason than flaky pie crusts?!

Executive director of the Rainforest Action Network Michael Brune points out that palm oil causes problems for people, as well as orangutans and other rainforest animals. In a recent Huffington Post article Brune cites two new reports indicting the palm oil industry, for contributing to world hunger and climate change while relying on illegal deforestation.

Brune points out that there’s hope for progress, due to increasing media coverage and consumer awareness; but (as usual) agribusiness corporations seem eager to escalate the exploitation:

“… the mainstream media is starting to take note of this important front in the battle against climate change. It’s too bad though, that the giant agribusiness companies aren’t. Cargill announced last week its intention to acquire more land in Southeast Asia to expand production of palm oil.”

Decimation of endangered orangutans and other rainforest animals, contribution to world hunger, and exacerbation of climate change: these are not things I’m willing to support, for the sake of momentary pleasure. As far as I’m concerned, palm oil is off my grocery list for good.

So what’s a dairy-free palm-oil-free cupcake-loving ecovore to do, without Earth Balance as a cooking staple? I’m glad you asked!

Amazing vegan chef Bryanna Clark Grogan has been working on developing a palm oil free vegan butter recipe, and last week pulled back the curtain to display it with a flourish. With support from Erik Markus at vegan.com and Mattie at veganbaking.net, Grogan has come up with a delicious-looking recipe using cocoa butter, soy milk, lemon juice, and other ingredients to replace Earth Balance on vegan toast.

Grogan provides supplemental production notes on her blog, so read those first; but the recipe is only available on vegan.com, and the author asks that it only be linked rather than reproduced. I’m off to order some fair trade cocoa butter post-haste; if you whip up a batch of this Buttah before I do, please report!

For further exploration, Mattie at veganbaking.net offers several vegan butter recipes that look intriguing and don’t seem to threaten anything with extinction (except possibly individual batches of cupcakes).

If you want palm oil out of Earth Balance spread, tell ’em so: all food issues in an industrialized society are consumer driven issues. Vegan cooks ARE the Earth Balance market, and they’ll find alternatives to palm oil if that’s all we’ll buy.

Learn more here. Share what you find out. Then shop accordingly.

There is no human need that only palm oil can meet: we support it — or don’t — on our whim. So if you value ethically sourced food, and embrace food choices based on compassion and conscious eating: don’t.