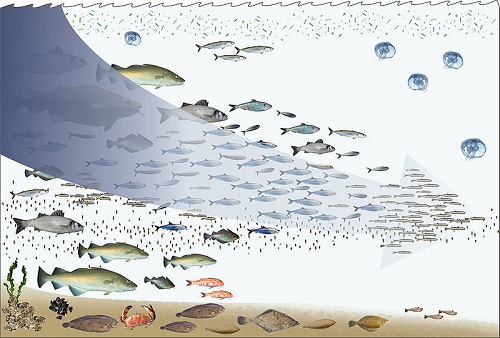 New research presented at the American Association for the Advancement of Science (AAAS) Annual Meeting shows that large fish such as cod, tuna, and groupers have declined by two-thirds over the past 100 years, while small fish such as sardines, anchovies, and capelin have more than doubled over that same period.

The study’s finding of a simultaneous decline in predatory fish and increase in prey fish provides the strongest evidence to date that overfishing has impacted ocean ecosystems on a global level.

“Overfishing has absolutely had a ‘when cats are away, the mice will play’ effect on our oceans,” said one of the researchers. “By removing the large, predatory species from the ocean, small forage fish have been left to thrive.”

Small fish at the bottom of the food chain are currently being turned into fishmeal to support the aquaculture industry, which is becoming increasingly reliant on this food source.

The study suggests that humans are “fishing down the food web,” meaning that the fishing industry has been targeting fish species that are progressively lower down on the food chain as predatory species become depleted.

The research was presented at the AAAS meeting as part of an experts’ panel to answer the question “2050: Will there be fish in the ocean?”  The panel predicted that, although there will be fish in 2050, they will consist mostly of the smaller variety.

Image courtesy of Hans Hillewaert via a Creative Commons license.