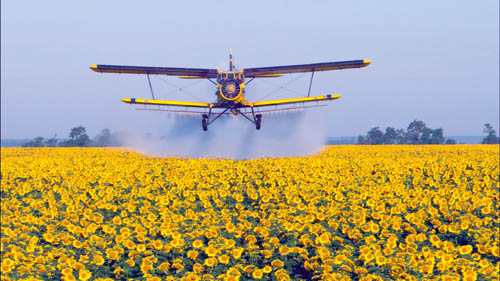 Last weekend Madison was host to Tales from Planet Earth, a local environmental film festival screening 50 films over three days. One film I saw was Our Daily Bread, a German film about the industrial food production and high-tech farming that managed to comment on the process without actually doing any talking. The image above, reminiscent of old movies and war films, is just one visual that’s stuck with me since.

Rather than my trying to muddle out a summary, here’s the filmmakers’ synopsis of the movie:

To the rhythm of conveyor belts and immense machines, the film looks without commenting into the places where food is produced in Europe: monumental spaces, surreal landscapes and bizarre sounds – a cool, industrial environment which leaves little space for individualism. People, animals, crops and machines play a supporting role in the logistics of this system which provides our society’s standard of living.

When the synopsis says the film “looks without commenting,” that’s exactly true. There is no narration and almost no actual talking throughout the entire movie. And since it’s in German I couldn’t understand any speaking anyway, meaning all I could interact with in the movie were the images.

At first the lack of commentary was uncomfortable, but it was ultimately an effective choice. When a director has people talking or narrating in a film, as an audience member I want to argue with them. The stark silence of the movie works because it doesn’t give the audience an argument to agree or disagree with – it just gives you the situation.

And the situation it presents is grim, although it’s not much different than the images we usually get about industrial food. There are chickens squashed together in pens, pigs being herded off crowded trucks to their death, cows so inbreed for muscle they resemble body-building champions. The lack of narration and commentary allowed the images to string together in a way that seemed new even if they’re uncomfortably familiar.

What struck me most was the way the industrial food processes serve to dehumanize the workers that are part of the system. The people in the film they were acting like machines – going through the motions of their process on an assembly line to make food. While I imagine you’d see the same thing in any factory job, this felt more uncomfortable to me because they weren’t just putting together widgets – they were slicing and dicing and tossing around other living things.

There’s one image I can’t seem to get out of my head. After hatching a batch of thousands of baby chicks, workers wheeled the refrigerator-like cases to an assembly line. Other workers separated the baby chicks from their shells by pulling them out of the box and tossing them onto a conveyor belt. The chicks were carried up a ramp then dropped into a device that shot them out into another container with the force of small, fuzzy yellow tennis balls.

That’s a kind of mechanized processes that’s hard to accept, and one made starker by the total lack of commentary included in the film.