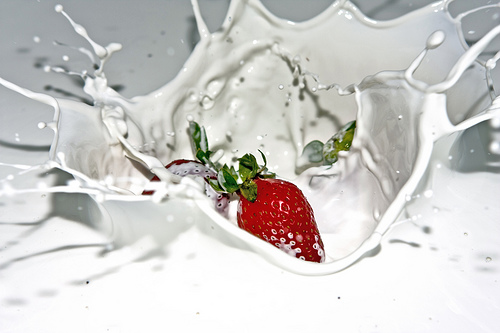 I grew up being raised quite strictly on organic food*. So, the idea of picking and choosing what to eat organic seemed a little odd to me as a kid. Granted, some things we bought conventional, but that was basically the only option with some things, so it wasn’t a matter of choice (i.e. get a conventional coconut or don’t get one at all).

Nowadays, living in Poland, “organic” is harder to come by, but I suspect (hope) the food we buy is more local and less laden with chemicals when not organic anyway (maybe I’m wrong, though, and should probably look into it — although, if we went purely organic here, that would really limit fruit and vegetable consumption and I imagine it wouldn’t be worth it). We do, however, have the option between organic and non-organic dairy of all sorts. And if Poland is anything like the U.S. when it comes to this topic, or, if it is anything like the UK, we should definitely be getting all organic dairy products. So, while I used to find it strange that some people bought some things organic and some things conventional, it looks like I am basically “one of those people” now. And now it makes a little more sense to me.

Anyway, let’s get beyond my rambling. Here’s the news recently out on the subject of organic versus non-organic dairy.

Organic Dairy in UK is Better for You, Scientist Recommends It

The health benefits occurred year-round, counter to the findings of a previous study conducted by the same team three years earlier but looking at the milk on farms, not bought from the store.

Of course, whether or not we should be eating dairy at all (which I think the evidence strongly suggests we shouldn’t), is a topic for another day.

*No, we weren’t rich — in fact, far from it, we were quite poor — but healthy food was an important priority for my parents.