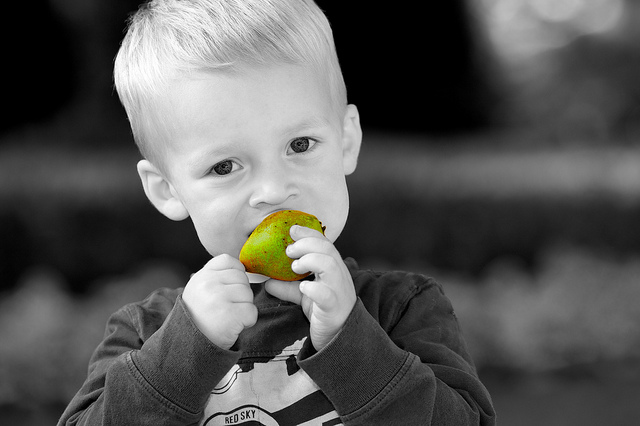 Last week the American Academy of Pediatrics released a report addressing relative benefits of organic versus conventionally grown food, for children. Various media outlets reported conflicting conclusions: some cited the AAP report as recommending organics for kids, and other sources cited the same report in asserting that organic food offers no benefits to pediatric health. So which is it? And why the conflicting reports?

Straight to the Source

Let’s start with the AAP itself. Conclusions of the recent report are summarized as follows:

…the American Academy of Pediatrics (AAP) has conducted an extensive analysis of scientific evidence surrounding organic produce, dairy products and meat. The conclusion is mixed: While organic foods have the same vitamins, minerals, antioxidants, proteins, lipids and other nutrients as conventional foods, they also have lower pesticide levels, which may be significant for children. Organically raised animals are also less likely to be contaminated with drug-resistant bacteria because organic farming rules prohibit the non-therapeutic use of antibiotics.

However, in the long term, there is currently no direct evidence that consuming an organic diet leads to improved health or lower risk of disease. However, no large studies in humans have been performed that specifically address this issue.

So after reviewing all currently available evidence, researchers found nutritional equivalence between organic and conventional produce and animal-derived foods, but higher pesticide exposure in children who consume nonorganics. The health professionals conducting this analysis say this pesticide exposure from nonorganic food could pose a ‘significant’ risk to children; but that’s all they can say, because long-term human research on the risk or safety of pediatric pesticide exposure through food consumption has never been done:

“At this point, we simply do not have the scientific evidence to know whether the difference in pesticide levels will impact a person’s health over a lifetime, though we do know that children – especially young children whose brains are developing – are uniquely vulnerable to chemical exposures,” said Joel Forman, MD, FAAP, a member of the AAP Council on Environmental Health and one of the lead authors of the AAP clinical report.

If cost is a factor, families can be selective in choosing organic foods, Dr. Forman said. Some conventionally grown fruits and vegetables tend to have lower pesticide residues. The AAP cites organic shopper’s guides like those provided by Consumer Reports and the Environmental Working Group as references for consumers.

Authors do emphasize the importance of including fresh fruits and vegetables in children’s diets, and encourage parents to include these foods in kids’ meals even if they can’t afford organic.

Janet Silverstein, MD, one of the lead authors of the report, says:

“Many families have a limited food budget, and we do not want families to choose to consume smaller amounts of more expensive organic foods and thus reduce their overall intake of healthy foods like produce.”

The report basically says nutrition is equivalent, but pesticide exposure is higher in nonorganics. There’s every reason to suspect this exposure could cause problems — there’s a lot about this risk we just don’t know, because research has never been done on long term health effects of pesticide consumption among children. But if you can’t afford organics, AAP researchers caution against avoiding nonorganic produce, since the nutritional deficiencies caused by lack of fruits and vegetables would likely be worse than the potential risks of pesticide exposure.

That makes sense. Got it!

He Said, She Said

Here’s where it gets weird.

It’s worth buying organic to avoid pesticide residues, at least in some foods, says the American Academy of Pediatrics in a report released today. Contrary to what the Stanford University study on organics a few weeks back suggested, the pediatricians say when it comes to feeding kids, relying on federal standards for pesticide residue isn’t good enough.

The pediatricians are worried because babies of female farm workers in California showed small but significant developmental and motor delays when their mothers were exposed to pesticides at levels similar to those deemed acceptable in conventionally grown produce while pregnant.

No studies have been done to see if exposure to similar levels of pesticides from simply eating produce would cause similar problems. But since early childhood exposure to lead and other toxins at very low levels is now known to be harmful, the pediatricians think caution is in order.

“Pretty much every study shows no nutritional difference,” said Dr. Janet Silverstein, a professor of pediatric endocrinology at the University of Florida. She’s a co-author of the report published Monday by the American Academy of Pediatrics.

Silverstein and her colleagues reviewed the available studies on organic and conventionally produced foods, including produce, dairy products and meat. They considered research about issues including nutrition, hormones, antibiotics and synthetic chemical exposure, plus factors such as environmental impact and price.

Overall, the docs came to a conclusion that may surprise some parents who believe organic is best for their kids

“In the long term, there is currently no direct evidence that consuming an organic diet leads to improved health or lower risk of disease,” AAP officials said in a statement.

However, that article does go on to mention that no direct evidence is available because no long term research has been done on the issue in question.

The bottom line here is that YOU SIMPLY CAN NOT MAKE GOOD RATIONAL DECISIONS BASED ON HEADLINES. Go to the source and consider the actual data, not just what second parties say about it. Then apply your own good judgment to that data.

Based on available research, nutritional content appears to be a draw — making the central question all about the areas where the organics and nonorganics do differ: pesticides and GMOs.

Pesticide: It Does a Body Good! (Said No Pediatrician Ever)

No one involved with this study challenges the fact that children eating nonorganic food are exposed to higher levels of pesticides than those eating organic food.

We know that children are especially sensitive to exposure to pesticides and other toxins; we also know that in-utero exposure to agricultural chemicals, among children of farm workers, seems to cause higher rates of developmental delays and other health problems. Due to lack of research, there isn’t evidence either for or against the premise that pesticide consumption through food harms children’s health, at contamination levels reflecting current nonorganic norms.

Here’s a question no one has adequately addressed, in my opinion, while covering this AAP report: why HAVEN’T those safety studies been done?

Can you think of one single other thing that we routinely put into our kids’ bodies without safety testing? Imagine this glaring absence of research for a vaccine, or medication, or children’s vitamin… imagine the manufacturer of any of these things saying, “Well, yes, this does contain known neurotoxins; we haven’t tested to see if they’re hazardous to your children’s development at this level of exposure, though, so it’s ok — there’s no conclusive evidence that it will poison them!”

Would you buy it?!

I think this lack of data, on something so potentially devastating to the health of children in America, is a testament to the power we’ve allowed Big Ag interests to assume in terms of governmental regulation. Agricultural pesticide manufacturers (Monsanto, I’m giving you the stinkeye!) wield enormous political clout in US politics in the modern age — could that be that a factor in the persistent dearth of research, on this (not inconsequential) topic?

There’s another question no one seems to be asking, absolutely perfect for parents’ reflection alongside this AAP report: why do we subsidize the kind of agriculture that results in the most possible poison on our children’s food? That’s a large part of WHY conventional and conventional/ GMO foods are cheaper than organics: our subsidy system creates an artificial ‘cheapness’ for these crops that organic producers then have to compete against, to everyone’s loss except the big chemical companies and factory farming interests who depend on artificially cheap (pesticide-laced) animal feed.

I’d like to see that question enter the ‘organic vs. nonorganic’ debate, for children and for everyone else who finds pesticide unappetizing.

To GMO, or Not to GMO: That Is (Part of) the Question

Another glaringly absent piece of this discussion involves failure to acknowledge that there are three categories of food under consideration, here, not just two — choices include organic, conventional, and conventional/ GMO. The risks of the latter two categories are similar, but separate. Like pesticide consumption among children, long term safety testing for GMO consumption has ALSO been ignored (even actively prohibited) by an industry determined to avoid independent scientific scrutiny of its products, at all costs.

Since most GMO crops are engineered to either resist pesticide or to actually produce poison in the plant’s own cells, there’s every reason to expect that a diet high in conventional/ GMO foods exposes children to even higher amounts of dietary pesticide than other nonorganic foods. Unless and until we mandate GMO labeling in the US, there’s no way to know if you (and your children) are eating conventional or conventional/ GMO foods; or to design studies evaluating GMO foods’ effects (if any) on pediatric development; or to avoid these kinds of foods because of that uncertainty — except to shop organic.

So choosing nonorganic food actually involves a compounded risk, or at the very least a compounded set of unknowns, based on currently available science. ‘Nonorganic’ encompasses TWO things parents might want to avoid, based on a total lack of safety testing in terms of consumption by young and rapidly developing human beings: pesticides and GMOs. Treating these as one category, in the ‘organic vs. nonorganic’ question, ignores and oversimplifies vast parts of the debate.

So: what is the most rational position, on the issue of organic versus conventional food for kids?

I think the AAP got it right, even if not all the media coverage did:

Then sit down with your family to enjoy a lovely organic meal!