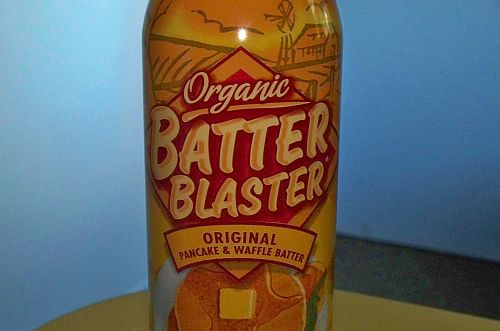 While I was buying eggs at the store yesterday, my daughter suddenly started jumping up and down and saying “Batter blaster! Batter blaster!” over and over. There, next to the eggs and above the orange juice, was a spray can – like those whipped cream cans – that proclaimed Organic Batter Blaster in dramatic Indiana Jones-style lettering.

I admit, the idea of blasting pancake batter anywhere near my kitchen sounded like a recipe for disaster, but the enthusiasm of the little ones holds its own appeal. So I bought it.

I was awakened this morning with the firm reminder that I had agreed to blast batter and make pancakes for breakfast. She had read the instructions and helped by getting out the pan and telling me to “shake well”.

When it came to blasting the batter, it wasn’t really blasting. That was a relief for me, but a bit of a disappointment for her and she wandered off while I finished cooking. The batter came out at a rate that gave me good control over how much made it into the pan.

Next came learning how to make the pancakes. The first one I made was about six inches across and didn’t work out too well. By the time the pancake was ready, the edges were too crisp. I noticed that the serving size on the can is a four-inch pancake, so I tried that size. It worked very well.

I made a stack and served them up. I thought the pancakes tasted good – a little sweeter than Bisquick or a homemade mix, but not too sweet and quite tasty. She liked them and ate the whole stack.

Batter Blaster is USDA certified organic and needs to be stored in the refrigerator. It’s certainly convenient and the pluses of blasting batter from a spray can include the ability to make just one pancake, skip the mixing step of making pancakes (not that that’s hard or anything, but it is another step in the morning), and fewer dishes to clean up.

With 28 servings in the can, Batter Blaster would last my family for three meals. At $4.99, that’s not a bad deal. There are cheaper ways to eat pancakes, but few as convenient.