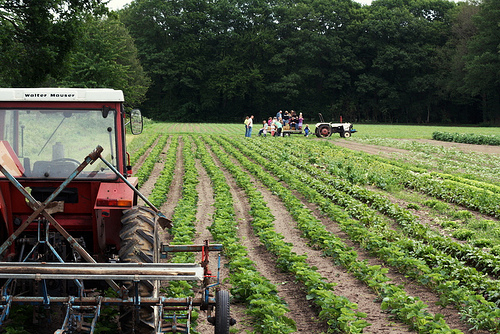 Washington, D.C. – Despite the crippling effects of the recent economic slowdown on many industries, the organic agriculture sector not only sustained itself during this period but also showed signs of growth. “In 2009, organic farming was practiced on 37.2 million hectares worldwide, a 5.7 percent increase from 2008 and 150 percent increase since 2000,” writes policy analyst E.L. Beck, in the latest Vital Signs Online release from the Worldwatch Institute.

The International Federation of Organic Agriculture Movements (IFOAM) defines organic agriculture as: “a production system that sustains the health of soils, ecosystems and people. It relies on ecological processes, biodiversity and cycles adapted to local conditions, rather than the use of inputs with adverse effects. Organic agriculture combines tradition, innovation and science to benefit the shared environment.”

In western Tanzania, organic agroforestry practices have helped rehabilitate some 350,000 hectares of desert land over the span of two decades. And in Ethiopia, coffee farmers are learning how to protect wild coffee plants, fertilize them using organic compost, and process them in a manner that retains the quality of the crop, without damaging the environment.

Although the global organic market has shown growth in the past few years, the rate has slowed since 2000, and there are several challenges that impede large-scale expansion of organic practices. The price premium on organic foods, for example, may dissuade many consumers from buying organic products, despite the potential environmental, ethical, and health benefits these products provide.

Rising farmland prices are putting a further strain on organic agriculture. Research by the International Food Policy Research Institute shows that foreign investors have spent up to $20-30 billion on land purchases since 2006. These price hikes are threatening global food security and are especially detrimental to small-scale farmers’ ability to enter the organic agriculture field.

Despite all these challenges, organic agriculture holds untapped potential for helping farmers and consumers alike build resilience to food price shocks, climate change, and water scarcity. By turning to organic agroforestry and switching from synthetic to organic fertilizers, farmers are not only raising their incomes by reducing input costs, but also adapting to the effects of climate change and helping to protect the environment.

“In order to keep feeding humanity for generations to come, and to feed people better, farming must reinforce conservation goals by adding diversity to the food chain and by healing ecosystems,” said Danielle Nierenberg, Worldwatch senior researcher and co-director of the Institute’s Nourishing the Planet project.

Worldwatch’s Nourishing the Planet (www.NourishingthePlanet.org) project has traveled to 25 countries across sub-Saharan Africa, shining a spotlight on communities that serve as models for a more sustainable future. The project is unearthing innovations in agriculture that can help alleviate hunger and poverty while also protecting the environment. These innovations are elaborated in the recently released report State of the World 2011: Innovations that Nourish the Planet.