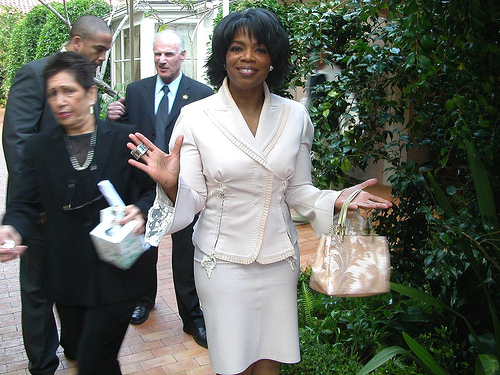 I wrote earlier in the week about Oprah’s decision to go vegan for one week and bring 378 of her staffers with her. The vegan challenge is up and Oprah has reported on it, so I thought I’d write an update for you.

Most Harpo Staffers Completed the Challenge.. Some Still Vegan

300 of the 378 staffers stuck to the challenge and stayed vegan for the whole week… and some of them even decided to stay vegan indefinitely. Her director Joe was one who decided to do so. He said that the vegan diet “agreed with him” and made him feel better. Oprah also, I’m not sure why (insider’s joke?), decided to ask him how his bowel movements were. “Great!” he said. “Great. Honest to goodness, great.” Interesting…

You can watch a video of the back-and-forth on TV Squad via the link above for a few days (their rights to the video will eventually expire).

While not all of the staffers are staying vegan, Harpo Production’s cafe is now going to have Meatless Mondays continuously.

Kathy Freston’s book “Veganist” was a big inspiration for the one-week vegan challenge. In fact, Freston’s first book was what got Oprah to go on a “vegan cleanse” for three weeks in 2008 and got her to start “leaning into” veganism. While some hard-core vegans may be opposed to Freston’s softer, “lean into it” approach, I think there are some key upsides to this approach that are worth highlighting:

Regarding the last point, there was a really interesting point in the week that was videotaped where one of the staffer was downright angry about the push to eat vegan. It resulted in a really interesting exchange between her and Freston that I’d advise watch ing (link above).

One key point Freston made in the exchange was that fast food is addictive. It sure is. Studies are beginning to identify the clear chemical addictions caused by meat, dairy, and certain substances. Freston either knows that or has some great insight into this easy-to-overlook factor.

For more on Freston’s approach, Vanity Fair’s award-winning journalist John Heilpern has a great piece on a 3-hour lunch with her. At the beginning of the piece, John notes how he felt very out-of-place at the eco-friendly restaurant where they were meeting and wondered what he was doing there. “I feel I ought to tell you,” he announced to Freston at the beginning of their lunch, “that I am a very simple man and a very simple eater. I was weaned in England on meat and potatoes.”

At the end of John’s piece, he notes, “since my lunch with Kathy Freston I have decided to give up eating all meat.” Wow, no small change there.

For those who watched the show or were inspired by it and want to try out the diet, Oprah’s website now includes a Vegan Start Kit as well. Of course, we’ve also got our very popular Eating Vegan series you can find all sorts of tips, advice, and info in and you can also read my post from a year and a half ago on “how to go vegetarian” for more along those lines.

Overall, looks like Oprah’s vegan challenge week was very fruitful and will have a lasting effect in a number of ways. Kudos to Oprah, Freston, the participants, and others who helped to make it happen.

To watch the show, here are a video to get started with, the first 10 minutes (more on YouTube):