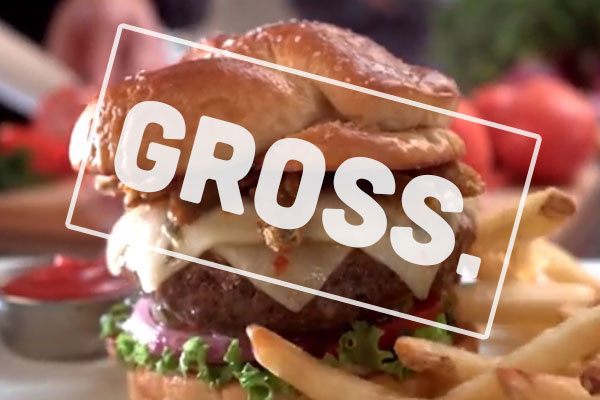 The conservative Christian group One Million Moms is protesting a Ruby Tuesday commercial for all of the wrong reasons.

Ruby Tuesday’s “Fun Between the Buns” uses pixellation to cover up the burger, cheese, and toppings in a recent TV commercial. Here is the :30 TV spot:

Here’s what One Million Moms has to say about the ad:

Ruby Tuesday is replicating a form of media that is gaining popularity and intended to be naughty but should be avoided if a company is concerned with its reputation.

The only question is which is worse, the slogan “Fun Between the Buns” or the graphic that is included with it? Parents do not want their children repeating the slogan, and the graphic is equally disturbing because it is symbolizing nudity. Everything between the top and bottom hamburger buns is pixelated, including condiments, meat, cheese and other toppings. This should only be done when trying to protect someone’s privacy and should not be tolerated when unnecessary in any other form of media.

What’s Really Disturbing about these Burgers

The trouble is – at least from this mom’s perspective – the reference to pornography is the least offensive thing on that screen. Let’s break down the fun between those buns:

The “fun” doesn’t stop there, though. One Million Moms ought to be offended about the buns themselves. Let’s talk about Ruby Tuesday’s GMO-packed pretzel buns. I couldn’t find a full ingredients list (hiding something, Ruby Tuesday?), but here is the info I was able to find about their pretzel burgers (all of these include fries, because that’s how Ruby Tuesday lists it on their nutritional info sheet):

That is more calories, fat, and salt than some people eat in an entire day. One one plate. No wonder they need to blur these monstrosities out!

One Million Moms: how about we quit worrying about the marketing. Instead, let’s call out Ruby Tuesday for the real abomination: these heart attacks on a plate served with a dash of animal cruelty and a healthy dose of antibiotics and pollution.