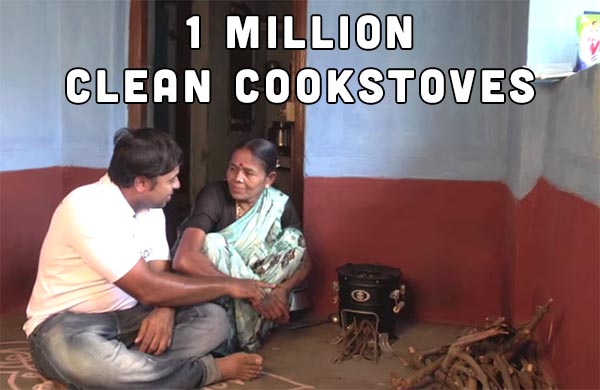 I’ve been writing about clean cookstoves for years: these simple pieces of technology are wonders of sustainability. They address dangers to human health posed by open-fire cooking; they also free up lots of time for women in the developing world. And, they contribute to waste prevention by allowing for much more efficient use of wood fuels.

While this might seem like a relatively small thing, keep in mind that billions of people in the developing world cook over open fires…often inside their homes. Affordable technology that reduces the health and environmental impacts of such cooking practices can make an immense difference. One of the first companies in this space, Envirofit, now has a sense of the global impact of clean cookstoves, as they’re just reached the milestone of one million stoves sold.

RELATED: 9 Steps for a Greener Food System in the Developing World

The video above gives you some insight into the impact created by those stoves in various parts of the world. The company also released some of the discoveries it’s made in its eight-year story, including an eventual prevention of 17 million tons of CO2 emissions over the lifetime of those stoves, and a $200 annual reduction in fuel costs per family using an Envirofit stove. No doubt this also results in a lot of trees left standing, and, by extension, forest ecosystems preserved or rejuvenated.

Want to know more about the company’s journey to selling one million clean cookstoves? Take a look at the report they’ve released in conjunction with this milestone (which included eliminating a lot of waste in their own processes and practices). Got your own stories or experiences to share concerning cookstoves as waste-reduction devices? Do so… in the comments.