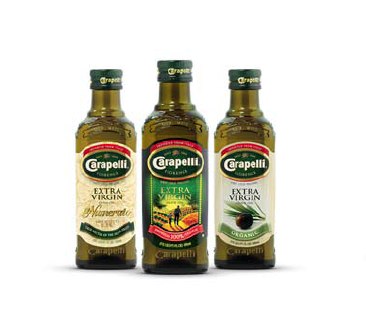 This is a Sponsored post written by me on behalf of Carapelli Olive Oil. All opinions are 100% mine.

Olive oil is pretty widely considered to be good for your health. As a monounsaturated fat, it is considered to be a good fatty acid that fights bad cholesterol. Organic olive oil also contains a variety of antioxidants, vitamins, and nutrients.

As reported at Global Healing Center, organic olive oil, in scientific studies, has been found to:

It’s heart benefits are its most notable, though. In the U.S., olive oil producers can put the following claims on their products:

Limited and not conclusive scientific evidence suggests that eating about 2 tbsp. (23 g) of olive oil daily may reduce the risk of coronary heart disease due to the monounsaturated fat in olive oil. To achieve this possible benefit, olive oil is to replace a similar amount of saturated fat and not increase the total number of calories you eat in a day.

More on its heart benefits from Wikipedia:

There is a large body of clinical data to show that consumption of olive oil can provide heart health benefits such as favourable effects on cholesterol regulation and LDL cholesterol oxidation, and that it exertsantiinflamatory, antithrombotic, antihypertensive as wellasvasodilatory effects both in animals and in humans.[50] Additionally, Olive oil protects against heart disease as it controls the “bad” levels of LDL cholesterol and raises levels of the “good” cholesterol, HDL.[39]

Now, I got a sampling of some Carapelli Olive Oil (an olive oil company based right outside of Florence, Italy that has been producing olive oil since 1983) for this article. And Carapelli’s olive oil connoisseurs and master tasters gave me some tips on how to conduct an olive oil taste test. The “Four S’s” of Swirl, Sniff, Slurp, Swallow is the basic formula.

The organic had a very sweet and peppery aroma upon sniffing, reminiscent of spicy greens from the garden. The slurp of oil was very smooth and clean at first, but gave way to a very spicy aftershock that made my tongue tingle a bit.

The Numerato, which harks a low acidity of .3%, released a somewhat sweeter and fruitier scent upon swirling. The oil was very light at first sip, yet hit the back of my throat with a spicy tang. I find it amusing that the oil leaves almost no aftertaste whatsoever, only this warmth in the throat. Who would’ve thought?

Carapelli’s signature 100% extra virgin olive oil produced a tangy aroma upon swirling it in my tasting glass and seemed to drench my tongue a bit heavier than the others, while leaving no aftertaste and almost no spiciness at the finish. The taste of this oil seemed simpler and stronger than the others.

Anyway, if you want to conduct your own little olive oil taste test, we’ve got a $1.00 OFF coupon at www.CarapelliUSA.com for you. Go get some today! :D