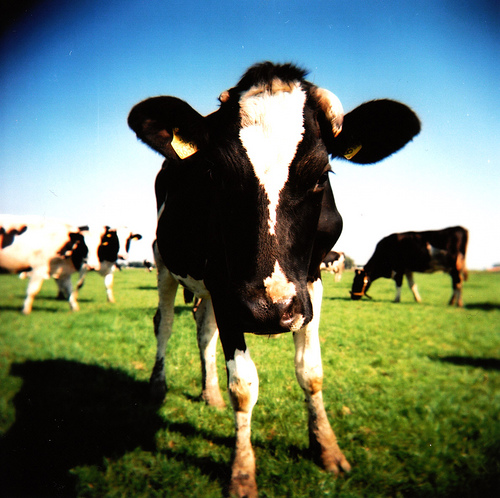 Ohio used to be one of these states, but a court has recently overturned this ban. This is a meaningful move, and you can bet that the makers of rBGH are going to fight back.

It was originally developed and marketed by agribusiness giant Monsanto…surprise!  Then sold to Eli Lilly.  And guess what.  They don’t want milk companies who do not use rBGH to label their milk as such (they say it implies something is wrong with rBGH), despite some evidence that this stuff may not be as benign as Monsanto’s original research wants you to think it is.

Labeling of milk from cows treated with rBGH

The Ohio court is basically telling the corporations to take a hike and allowing milk to be labeled as rBGH-free.  The case determined that there is indeed a difference between milk from rBGH-free cows and cows treated with rBGH.

Previously, Monsanto had sued multiple farms and governments trying to prevent labeling milk as rBGH-free.  According to them, when a company labels a product as rBGH-free, it is implying that there is something wrong with milk from cows treated with rBGH…and if you thought that, then maybe you wouldn’t want to buy milk from rBGH cows and then they wouldn’t make money off of it.

Their research says nothing is different about it.  Some independent research begs to differ.

Some of the key differences are:

Some other problems stemming from rBGH use are:

If I were a milk drinker, these are not things I would want associated with my milk, and I would want to know where my milk came from.  (Here are some options for milk alternatives.)

The National Institute of Health supported the FDA opinion that milk and meat from cows supplemented with rBST is safe for human consumption, but this, at least in my opinion, should be taken lightly as Monsanto has extremely powerful lobbyists and has more or less infiltrated the US government.

*This version corrects that Posilac, the rBST product developed by Monsanto, was sold to Eli Lilly.