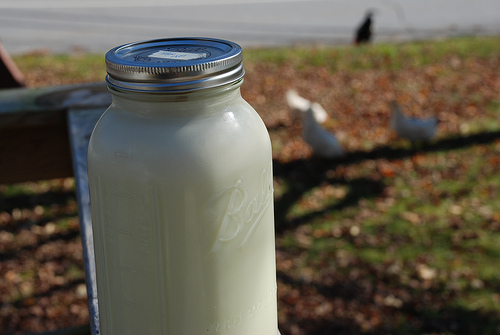 Milk seems like such a simple product. It even has smiling cows on the container and what’s better than a happy cow?

It also seems like it should be a single-ingredient product. Sort of like when I buy lettuce at the produce stand – there’s only lettuce in that bag. While fluid cow’s milk is mostly milk, it has been enhanced or fortified with vitamins A and D and sometimes other things.

That’s nothing compared to what happens to other dairy products. In the olden days, sour cream, yogurt, and other fermented dairy products were simply fermented. Nowadays, they’re fermented, but also contain other ingredients for an artificial sour taste and several more to thicken and smooth it.  (You can still make your own sour cream at home and skip all the extra ingredients.)

But back to plain old milk. The thing that makes most supermarket milks unsuited for my October Unprocessed challenge is the homogenization. Pasteurization can be done in the kitchen easily. Homogenization is something quite different. I’ll link to this site that explains homogenization in detail, but in short, the milk is forced under high pressure through very small holes in order to break up the fat molecules. Before homogenization, fat molecules in milk are 2-10 microns in size. Afterwards, they’re 0.2-2 microns. I’m sure I couldn’t create that kind of pressure in my kitchen.

Milk without homogenization has cream floating on top. When you want to drink it, you have to shake the milk to mix the fat back in. It’s the same thing I do for fruit juices and it doesn’t seem like that much of a chore. I guess I’m just mystified as to why homogenization is done.

In every supermarket around here, there is one brand of milk that is not homogenized. It comes from small dairies, so it’s a different farm supplying each grocery. It tastes thicker and creamier than homogenized milk, although it’s my understanding that the percentage of milkfat is the same as in homogenized whole milk.

My cornbread recipe originally called for low-fat sour cream, which is too highly processed for October Unprocessed. I substituted non-homogenized milk for the sour cream and it turned out perfectly.  This is another of those bread recipes that can be made almost last minute.

Mix all ingredients together. They will form a batter, rather than a dough. Pour into a greased 9×9-inch square pan. Bake at 425 degrees Fahrenheit for 20 minutes, or until a toothpick in the center of the cornbread comes out clean.