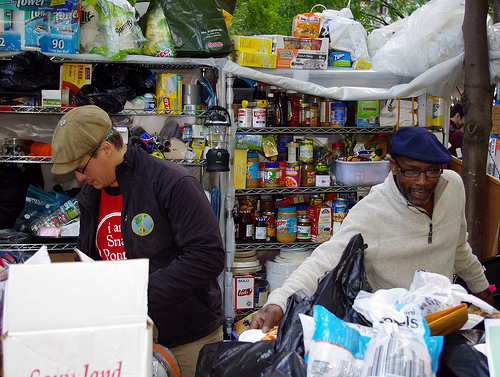 In the beginning of the protest, the local farmers came by individually to drop off produce for the Occupy Wall Street movement. As time went by and the protest grew, distribution of food needed to become organized and the Occupy Kitchen was formed.

A soup kitchen nearby offered the use of their professional kitchen. After the soup kitchen finishes for the day, OWS volunteers bring in the food for the Occupy movement and prepare dinner. The video shows a behind-the-scenes view of the Occupy Kitchen.

The farms have also organized. Feed the Movement is about getting awareness of the industrial food system into the general Occupy movement.

Feed the Movement is delivering food to the Occupy Wall Street and Occupy Boston camps and needs donations and volunteers to move the food. 100% of donations go to the farms who are giving the food to the protestors. Everything else – collection, delivery, preparation, distribution – is done by unpaid volunteers.

Go to the Feed the Movement site to find out how you can help.