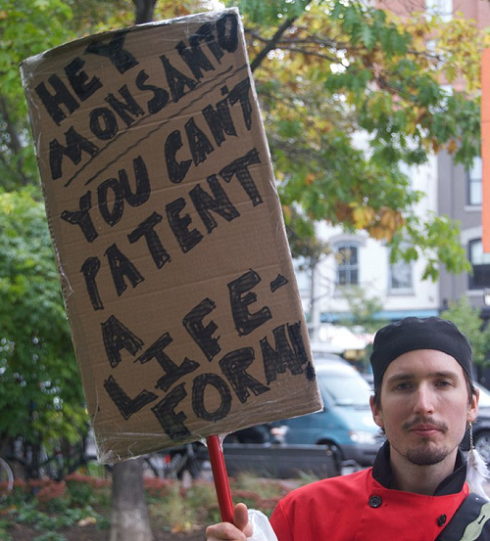 I’ve been thinking about the links for awhile, but it has taken me some time to get into writing an Occupy Wall Street/Big Food piece. So many other things going on in the food movement in October! :D

I think for anyone following food issues, especially food policy, knows that the same financial-political system that makes some people absurdly rich and many others poorer and poorer also makes our food less and less safe, decreases our food security, and result in a Big Ag system that hurts most to benefit a few fat cats.

Still, though, let’s draw some of the lines.

At the most obvious level, as the Institute for Agriculture and Trade Policy recently wrote, “Wall Street deregulation has not only made the stock market extremely volatile, it has increased prices and price volatility in agricultural markets.” That is, the relationship between government and Wall Street firms has turned food into commodity like any other, subject to the whims of the market. For decades, only people directly involved in agriculture (e.g., farmers) could freely participate in trade of futures of agricultural commodities (e.g., corn, soy, wheat). Outside speculators were allowed into these markets but with strictly enforced limits to how much they could buy. Futures trading served a practical purpose, giving farmers a guaranteed price for future harvests, and prices stayed relatively stable and reasonable for both buyers and sellers.

But in 2000, a wave of industry-backed deregulation raised and then removed these limits on speculation, which opened commodity markets to a flood of new players—these later included funds controlled by some of the biggest Wall Street firms looking for new investment opportunities after the housing bubble burst. Flooded with new investments unconnected to any direct stake in crop prices, in 2008, the commodity markets exploded, driving up grain prices worldwide. The grain price spikes were catastrophic for millions of people worldwide. Farmers, who sometimes benefit from high grain prices, mostly were no better off, because similarly skyrocketing energy prices also drove up prices of agricultural inputs.

In 2008 and 2009, the UN estimated that an additional 130 million people were driven into hunger by the food price bubble. Spontaneous food riots broke out in dozens of countries where chronic hunger is a reality. Today’s Wall Street protests are not unconnected to those; the effects of food and energy speculation continue in 2011. A study in June by University of Massachusetts Amherst professor Robert Pollin estimates that U.S. gasoline prices are $0.83 higher per gallon due to Wall Street speculation. The CEO of ExxonMobil said he estimates prices are $1.20 to $1.40 higher per gallon. And food commodity prices are as high, or higher, than they were in 2008—while 46 million Americans are now living below the poverty line, struggling with basic expenses like food.

What are people doing about this? Is the Occupy Wall Street movement embracing this?

Yes and yes.. oh, wait, the first question wasn’t a “Yes or No” question…. Well, occupy wall streeters have been implementing, teaching, and spreading decentralized sustainable food options, such as permaculture and gardening.

“I can’t express how happy it makes me to learn that the implementation of sustainability and permaculture principles is spreading to many Occupy encampments –and spreading with the same momentum as the Occupy Movement itself,” Daniel Owen writes on occupy-wallstreet.com.

“Many of the Occupy encampments have set up committees to analyze their own environmental impact, and conceive of practical solutions. Since Mobile Design Lab first installed a grey water system (more below), sustainability committees in different parts of the country have introduced peddle powered generators, solar panels, bike sharing programs and permaculture workshops…. There are even long term projects, such as composting and gardening.”

They’ve also had events, such as Take Back Our Food in Zucotti Park this last weekend.

Hope the positive momentum continues on. Have more to share on this? Please drop us a note!