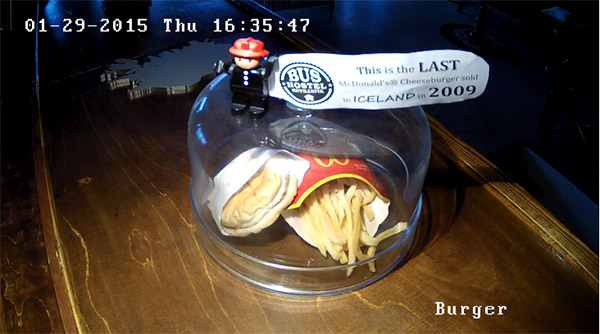 The world seems to have a fixation with rotting hamburgers, fast food and otherwise. We love seeing how long they take to decompose or whether they decompose at all. The video above shows seven different burgers aging under glass for 30 days.

The seven rotting hamburgers video was from Buzzfeed, but it’s just one of many. Check out this one from the Canada Agriculture and Food Museum, which shows a rotting hamburger in a 47 day time-lapse video.

Some countries are taking the rotting hamburger craze even further. The Na­tional Mu­seum of Ice­land has an exhibit called “The Last McDonald’s Hamburger in Iceland.” Micky Ds closed its last Iceland location in 2009. The day that the last McDonald’s closed, Hjörtur Smárason bought a burger and stuck it on a shelf in his garage. That rotting hamburger is on display, and you can watch it not decay on a webcam. Here’s a screengrab:

So, where did this obsession begin? It looks like it all started back in 2008 when Karen Hanrahan, from Best of Mother Earth shared a picture of one of the props she uses in her lesson plan on healthy eating for kids. The prop was a McDonald’s hamburger from 1996 that looked the same in 2008 as it did 12 years before.

If you want to dive into the science behind why McDonald’s burgers (and many other hamburgers) don’t rot, Serious Eats did some interesting experiments and gets really in depth about this phenomenon. There are also links in that article to even more rotting hamburger photo and video projects.