If you’re a regular reader here, you know that we consider food packaging waste an important part of the food waste picture. So we were pretty excited to hear that New York had issued a ban on Styrofoam take out containers. When it comes to packaging waste, Styrofoam is among the worst of the worst. You can’t easily recycle it, and it leaches all kinds of nasty stuff into the food it touches, especially if that food is hot or greasy.

I got a really interesting press release in my inbox earlier this week. It was from a PR firm, and it claimed that NY mayor Bill de Blasio had banned Styrofoam recycling. That seemed pretty dicey, so I sent it on to Jeff McIntire-Strasburg at our sister site Sustainablog. Jeff focuses on how companies and individuals manage waste, so it seemed like a good fit for him.

After a little bit of research, Jeff emailed me back with a link to the piece he wrote below. The real story is that the release came from a front group for the American Chemistry Council, an advocate of the plastic industry. Read on to see how the ACC and a company that produces Styrofoam containers twisted the New York Styrofoam ban to sound like an affront to recycling. 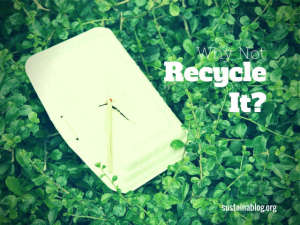 In an economic and environmental defeat for small business owners and New York City taxpayers, Mayor de Blasio and Department of Sanitation Commissioner Kathryn Garcia announced today that they would implement a city-wide ban on polystyrene foam foodservice containers, refusing an offer that would have recycled 100% of the City’s foam and rigid polystyrene.

Well, that’s a disappointing decision from a supposedly progressive administration, right? If they’re not going to recycle expanded polystyrene – aka Styrofoam – then it will just continue to clog up landfills. Sounds kind of like a no-brainer.

Or, is this the whole story?

Consider this: searching Restaurant Action Alliance NYC, as well as The Coalition to Put a Lid on It NYC (the other organization mentioned in the press release) both led me to this website, run by the American Chemistry Council. And who belongs to the American Chemistry Council? Well, Dart Container Corporation, the company that proposed the recycling offer mentioned above (and which posted this press release on their own web site). So, despite the perception created by the press release of multiple organizations and voices criticizing this decision, there’s really just one, plus the trade group to which it belongs.

What does the de Blasio administration say? As you might imagine, they also put out a press release, in which they claimed:

After consultation with corporations, including Dart Container Corporation, non-profits, vendors and other stakeholders, the Department of Sanitation (DSNY), has determined that Expanded Polystyrene (EPS) Foam cannot be recycled, which led to the ban. DSNY also determined that there currently is no market for post-consumer EPS collected in a curbside metal, glass, and plastic recycling program. As a result of the ban, manufacturers and stores may not sell or offer single-use foam items such as cups, plates, trays, or clamshell containers in the City. The sale of polystyrene loose fill packaging, such as “packing peanuts” is also banned. (emphasis added)

So, what’s the deal? Is Styrofoam recyclable? Did the Mayor and sanitation commissioner blow a big opportunity… or make a reasonable decision? Did Dart Container Corporation make a legitimate offer to recycle all of the city’s polystyrene?

Can You Recycle Expanded Polystyrene?

This is the main question here, and the short answer seems to be “yes… with the right technical and economic conditions.” Odds are, you can’t put polystyrene and other #6 plastics in your recycling bin. That doesn’t mean there aren’t processes for recovering the material; rather, it almost always means that it’s not economical to do so. I’ve done a lot of poking around on this, and found a number of different answers to this question, but this one from the Georgia Recycling Coalition made the most sense to me:

Expanded polystyrene (Like blocks used for packing) is not that recyclable from a post-consumer standpoint because of the cost and storage time to gather a truckload quantity. Sometimes the impact of driving them to a location to recycle them negates the environmental advantage of recycling them. There are companies that collect that grade, but are mostly industrial and pre-consumer.

Am I claiming that this is the answer to this conundrum? No… there’s even a company in the St. Louis region that processes polystyrene foam for recycling. But I’m willing to bet that the economics of this are dicey. Not knowing the details of the deal offered to New York City, and the general problems with recycling this material, leads me to believe the Mayor’s office.

Styrofoam And The “Three Rs”

But we’ve got at least one other guideline for this issue: the “Three Rs.” As many of us have pointed out over and over, “Reduce, Reuse, Recycle” isn’t just a meme; it’s also a hierarchy. From an environmental perspective, it’s almost always best to reduce the use of material. That’s what the polystyrene ban (which originated with the Bloomberg administration) does: it keeps the material – in the form of food service containers, anyway – out of landfills by not using it in the first place. Knowing that much of this material isn’t clean, and thus not recyclable anyway, adds to my own support of this ban.

But, finally, Dart’s argument that this means all #6 plastics are now destined for the landfill doesn’t work, either – if there’s a market for this material, recyclers will want to get their hands on it, and work with the city to do so. The fact that only Dart has come forward with a plan – and that they stand to benefit from keeping the sale of these materials legal – doesn’t support their position that there’s a demand for expanded polystyrene. Finally, why not get into the reusable container business?

But I certainly could’ve missed something here, or misinterpreted the economics… so feel free to correct me, or otherwise add your thoughts to the discussion.